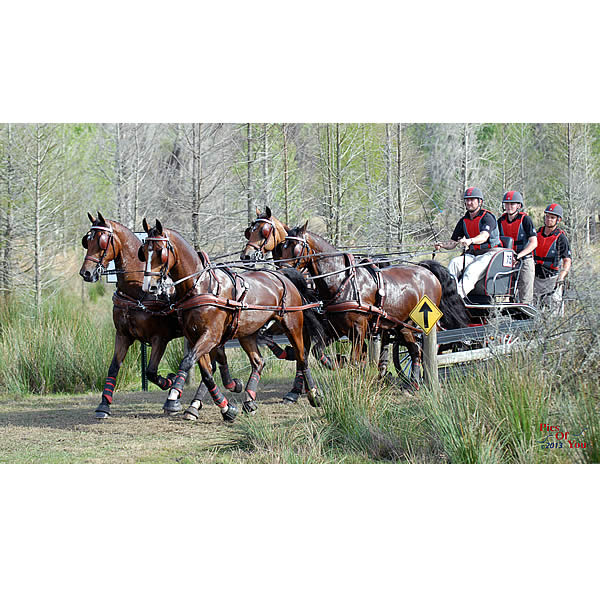 Ocala, FL (May 15, 2013) – Team Weber will continue to be fueled by Pennfield as they train and compete across the globe.  Pennfield, which was recently acquired by Cargill Animal Nutrition, is excited to continue the partnership with the nine-time USEF National Four-In-Hand Champion, Chester Weber, for a fourth year in a row.  Weber has been feeding Pennfield Feeds, specifically, EnduroEvent Ener-G from the Gold Medal line, to his record breaking Four-In-Hand team throughout their training and award winning performances even before he was officially sponsored. He attributes much of their success to this high quality diet.  “You are what you eat, and Pennfield products are made of high quality grains and highly digestible fibers,” Weber explains. “To put it simply, I believe they use the best quality raw materials to formulate superior products for our equine partners.  EnduroEvent is slow burning energy that suits the work required of the FEI level driving horse,” he adds.

“Chester understands the important role high quality nutrition contributes to competitive success,” states Tami Jones of Cargill. “Cargill is proud to partner with this world-class driving champion who feeds Pennfield feeds to his horses.  We are both pleased and honored Chester has selected Pennfield as his feed of choice for the fourth consecutive year!”  Jones also adds that they would like to recognize the many contributions that Weber has made to the equestrian community over the years through his overwhelming success in combined driving.  She states that they are excited to be able to continue to support him and his amazing team of horses.

Most recently, Team Weber found their stride at the Live Oak International CDE in Ocala, Florida, where despite the fury of the weather, they topped both the Dressage and Marathon phases to take the win in the FEI Horse Teams division.  The tempestuous weather led to ceding the Cones phase to Mother Nature.  “Our team worked very well,” said Weber about their performance at Live Oak.  Under the guidance of US team coach Michael Freund, Weber decided to keep the same team for Live Oak as was used earlier in the season at Little Everglades, which was the same team he used to clinch an earlier Dressage Test 11 world record.  Out of this team, Boris, Weber’s left wheel horse, put in a fantastic performance and really showed what he was made of.  Weber hopes to keep up this team synergy and winning record as they look toward the future and the CHIO Aachen.  With sights set on a competitive season in Europe and an attempt to win a tenth National Championship at the Kentucky Classic, Team Weber has no plans to let the first half of 2013 outshine the second!

As one of America’s most driven and decorated competitors, Weber entered unchartered territory last year when he won the USEF Four-In-Hand Championship for the ninth time. Weber continues to be a driving force behind American four-in-hand combined driving, and promotes the sport wherever he goes by bringing in the ribbons. For more information on Weber and his combined driving team, visit their website at www.chesterweber.com.