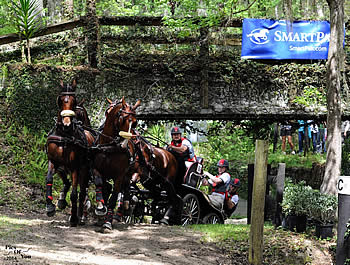 Chester Weber and his team on course in Saturday’s marathon. (Photo courtesy of PicsofYou.com)

Ocala, FL (March 22, 2014) – Ocala, Florida horseman Chester Weber makes it look so easy.  The 10-time USEF Four-in-Hand National Champion and his KWPN team made one of the most challenging combined driving marathon courses in America look like a walk in the park, rounding the second of the championship’s three phases with an astonishing 81.31-point score overall and establishing a lead after Saturday morning’s competition that will be very tough to catch.

Weber’s command of his team was all the more appreciated after his closest challenger after dressage, Misdee Miller, of Sarasota, FL, struggled at the water hazard, costing she and her KWPN team both time and penalties. Miller’s 270.57-point score dropped her to third, making the likelihood of catching ‘Mr. Dressage’ in Sunday’s cones phase virtually impossible, while Canadian whip Darryl Billing brought his KWPN team up to second-place (153.23) and Casey Zubek, of Manhattan, IL and his Dutch Warmblood team dropped to the bottom of the Four-in-Hand standings after elimination at the second hazard.

“Today, the horses were like music,” said Weber, “and I felt like their conductor.  They showed their National Championship form.”

In the FEI Single Horse, Suzy Stafford of Wilmington, DE and her Morgan dropped to second (65.75 points) behind fellow Morgan driver, Cheryl Pratt Rivers of Stockbridge, VT, who moved into a narrow two-point lead (63.49) going into Sunday.

A four-point margin separates leader (71.98) Jennifer Matheson, of Aiken, SC, and her German Riding Ponies from Elizabeth Keathley, of Woodbury, TN, and her Welsh pony’s 75.88-point effort in the FEI Pair Pony sponsored by Hillcroft Farm. In the FEI Single Pony, also generously sponsored by Hillcroft Farm, the German Riding Ponies of Tracey Morgan of Beallsville, MD maintained their lead (68.19).

Following the noon conclusion of the Marathon phase, the world famous Budweiser Clydesdales returned to the John Deere stadium at Live Oak International with a standing-room-only performance by the six-in-hand team and set the stage for the only thing larger than the mighty horses:  the fences facing the 38 horses and riders from around the world competing in Saturday afternoon’s $50,000 Live Oak International CSI**W Grand Prix.

The heated competition on the luxurious 5,000-acre Live Oak Plantation estate of Chester Weber and his family was complemented by an evening of cool chic under the VIP Tent for the James Bond 007-inspired Lugano Diamonds Competitor’s Party.  The title sponsor of the 2014 Live Oak International Competitors Party, Lugano Diamonds delivered an evening of elegance truly as remarkable as its collection, which may be viewed at luganodiamonds.com.

The final day of the 2014 Live Oak International promises to continue to deliver the precision and athleticism that has become the hallmark of this Florida horse country tradition.  The Cones, or Driving Obstacle Competition, begins Sunday morning at 9am.  A special Coaching Presentation will be offered at 1:15pm to introduce horse lovers to this beloved American driving tradition, followed by an impossibly cute Leadline Class for the youngest equestrians at 1:30pm, and Live Oak International will wrap up for 2014 with the $33,000 CSI**W Hollow Creek Winning Round.

Admission is $10 at the gate for adults and $5 for seniors and children under 12. It is strongly recommended that spectators bring lawn chairs. Concessions and a Vendor Village will be open throughout the competition.

For more information on Live Oak International, including a full schedule of events, visit www.liveoakinternational.com.