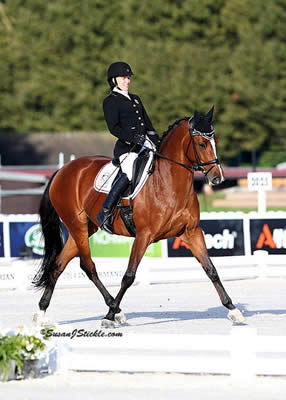 West Grove, PA – September 26, 2014 – Todd Flettrich is an internationally recognized dressage rider and trainer. Rebecca Hart is one of the brightest stars of Para-Dressage. When the two joined forces, they became an unstoppable team of positive energy and excellent horsemanship.

Hart, a Grade II Para-Dressage athlete with birth-onset hereditary spastic paraplegia, is a two-time paralympian and an incredible six-time USEF Para-Equestrian Dressage National Champion. Prior to the 2010 World Equestrian Games, Rebecca’s primary trainer, Missy Ransehousen, asked professional dressage rider Flettrich to help polish Rebecca’s performance during her final preparations for the event. Since then, he continues to work with Hart before many major events.

“When Missy asked me, I was skeptical because I had not taught a para-rider before,” Flettrich acknowledged. “Yet it wasn’t as difficult as I thought because it all comes back to the basic riding principles.”

The relationship between Hart and Flettrich has grown and strengthened over time and through several mount changes for Hart. They work together because they feel it’s a mutual learning experience.

For Hart, the first meeting with Flettrich actually swept her off her feet.

“I went to Florida to hang out with Margaret Duprey and Todd. When Missy dropped me off at the barn, I literally fell out of the truck at his feet,” Hart said laughing. “I told him to teach me as if I were an able-bodied rider and I will adapt it to my body. If something doesn’t work we’ll have a conversation about it.”

“Todd is impeccable with his timing and his finesse with the aids to get the horse responding at exactly the right moment,” said Hart. “He makes you very aware of what’s going on beneath you and ensures you’re able to keep it playful, light and energetic. Pippin really responded.”

Hart qualified for the 2012 London Paralympic games with her new mount Lord Ludger and, again Flettrich was there to polish and perfect Hart’s riding prior to the big competition. With his help, Hart finished in fourth place, just shy of a medal.

After his impressive career, Lord Ludger retired and Hart began the challenging search for a new international mount. With the generous support of Margaret Duprey, owner of Cherry Knoll Farm, they purchased the 12-year-old Danish Warmblood mare, Schroeters Romani.

“I had to have a skillset in mind when finding a horse that would work with my disability,” Hart explained. “My disease is a progressive one that causes muscle wasting and paralysis from your mid-back down; what I could do six months ago with my body I can’t do now. So I need a horse that is adaptable so I can start somewhere and progress, and that’s what I fell in love with Romani for.”

Flettrich shares Hart’s confidence in her new mount and said having Romani has made teaching her easier.

“Rebecca having the right horse allows her to really excel,” said Flettrich. “We focused on the basics like fixing her balance and since she knew my riding principles, it was easy to jump in and start helping.”

This March, Hart and Romani tackled their first big CDI at the Adequan Global Dressage Festival 12 CPEDI3*, with Flettrich helping to train them prior to the event once more.

Through hard work and training with Flettrich, Hart and Romani solidified their bond and began to set sights on the Alltech FEI World Equestrian Games.

After she claimed her sixth U.S. National Championship in June, Hart took Romani to France for the 2014 Alltech FEI World Equestrian Games (WEG). The pair qualified for the Freestyle after finishing in seventh place with a score of 67.486 percent individually.

While Flettrich could not be in Normandy, he was confident about Hart’s abilities and said he didn’t need to give her any advice.

“Working with Rebecca has been a wonderful experience. Sometimes I think Rebecca has taught me more than I have taught her,” Flettrich laughed. “That girl has an unbelievable work ethic and she does not allow her disability to run her life.”

With the help of her trainers and mentors, Hart has climbed to 25th position in Para-Dressage on the FEI’s World Individual Ranking List.

“I’m so grateful to all of the people who have helped me along the way, Margaret, Todd, and Missy,” Rebecca said.