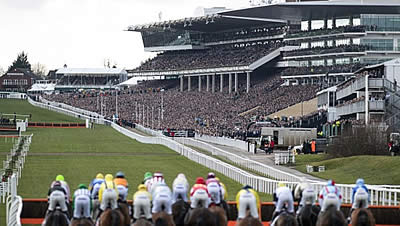 The Cheltenham Festival is the most important meeting in the entire National Hunt calendar, and it has delivered countless exhilarating races during its 160-year history. However, a handful of key moments stand out as the greatest of all time.

A Hat-Trick for Best Mate

Prestbury Park was rocking when the legendary Best Mate clinched a third consecutive Cheltenham Gold Cup triumph in 2004. Henrietta Knight’s superstar battled to a narrow victory ahead of Commanche in 2002 and then finished 17 lengths clear of the chasing pack the following year. He went off as the 8/11 favourite in 2004, but he was nine years old by that point and some commentators wrote off his chances of success.

Best Mate looked in trouble with a few fences to go, but he hit the front approaching the final fence and then charged up the hill in front of his screaming fans. Sir Rembrandt and Harbour Pilot both gave chase and it led to a pulsating finish, but Best Mate held them off and completed his hat-trick. He joined Golden Miller, Cottage Rake, and Arkle in achieving the feat, but few thought it would be possible in the modern era. Best Mate made a mockery of such projections. “Just listen to them!” said Knight as the crowd roared. “I thought we were beat coming to the last, but he’s tough, too. He was brilliantly ridden.”

The Gold Cup is the biggest race of the year and it serves as the main event on the final day of the Cheltenham Festival. All the leading lights from across the UK, Ireland, and further afield gather to compete for the ultimate glory, and it often boils down to a thrilling battle between some of the famous, short-priced superstars. In 1990, the legendary Desert Orchid was the biggest icon in the business. He had won the race the previous year, and he was the odds-on favourite to defend his crown, although some experts though Bonanza Bay and Toby Tobias could give him a run for his money.

To say Norton’s Coin flew under the radar in the build-up to the race would be an understatement. He was in dreadful form, and owner Sirrell described him as an “ugly, plain chestnut”. He only took part in the Gold Cup due to a mix-up. Griffiths wanted him to run in the Carthcart instead, only to realise he was ineligible. His owner reluctantly sent him into battle and prayed he would finish in the top six so he could recoup the £1,000 entry fee, but most viewers thought he was simply making up the numbers.

He went off as the 100/1 underdog, and he was expected to flop. Yet Norton’s Coin left his poor form in the rear-view mirror. He was sitting comfortably in fourth at the third last, behind Desert Orchid, Ten of Spades, and Toby. He drew gasps as he soared past Desert Orchid at the penultimate fence. Ten of Spades fell, leaving Norton’s Coin locked in a thrilling battle with Toby Tobias. He pulled up alongside the frontrunner at the final fence and then won the prolonged struggle to finish three-quarters of a length clear of his rival, with the fastest winning time in 47 years.

There was barely a dry eye in the house when the unlikely duo of Paisley Park and owner Andrew Gemmell earned a fairy-tale success in the Stayers’ Hurdle in 2019. Gemmell was born blind, but he spent many years listening to horseraces on the radio and developed a love of National Hunt racing. He then began building up his own stable of runners. His success was modest and he never expected to secure a winner at Cheltenham, but Paisley Park began to gather strong momentum throughout 2019.

He ended up going off as the heavily backed 11/8 favourite to win the Stayers’ Hurdle and the scenes were incredible as he outpaced his rivals to win the race. “I can’t believe it’s happened,” said an emotional Gemmell after the race. “It’s fantastic. I’m in tears. Wow. I couldn’t see the race, but that roar is incredible.”

Kauto Star cemented his status as a titan of the National Hunt scene when he surged to victory in the 2007 Gold Cup. He was the 10/11 favourite to defend his crown the following year, but he ended up finishing second, seven lengths behind talented stablemate Denman. The excitement was palpable when the duo lined up alongside one another for the 2009 renewal of jumps racing’s blue riband event.

Many expected a ferociously tight battle, but in the end Kauto Star produced one of the greatest performances ever seen. He finished an astonishing 13 lengths clear of Denman and became the first horse to ever regain the Gold Cup. Trainer Paul Nicholls almost secured a 1-2-3, but Tony McCoy on Exotic Dancer finished third instead. Yet there were no complaints from the Ditcheat maestro. “What an unbelievable horse Kauto Star is,” he said.

Henderson has always loomed large over the Cheltenham Festival, but his finest moment came in 2012. Sprinting Sacre helped him get off to a flying start when he won the Arkle at 8/11 on the Tuesday. Then Henderson saddled an astonishing four winners on the Wednesday: Simonsig (2/1), Bobs Worth (9/2), Finian’s Rainbow (4/1), and Riverside Theatre (7/2). A stable lad at his operation placed a five-fold accumulator on all of them and won £1 million.

During the course of the festival, Henderson secured seven winners. That saw him overtake Fukle Walwyn as the most successful trainer in Cheltenham Festival history, with 46 wins, and it was all thanks to that wonderful Wednesday. A young whippersnapper by the name of Willie Mullins has since overtaken Henderson by securing 65 Cheltenham wins, but Henderson is now just one back on 64. The Cheltenham odds, which you can check out here, show that both men have a number of heavily fancied runners in 2020, so it will be exciting to see who holds the record when all is said and done.