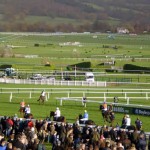 16th November, 2009 – Fierce winds and testing going challenged entries at Cheltenham’s Open meeting, reputedly the most important venue in the first half the National Hunt season in England. Each of the 3 days presented a feature race, the highlight being the highly competitive ‘Paddy Power Gold Cup’ which has been a high point in the racing calendar since 1960.

SURPRISINGLY, the Irish, with their impressive winning record at the Cheltenham Festival in March, had not won the Paddy Power Gold Cup or its equivalent for almost three decades but this year the Edward O’Grady trained ‘Tranquil Sea’ cast adrift his 15 rivals before the home straight to the sheer delight of the crowd. Jubilant jockey Andrew McNamara couldn’t hide his joy when the well backed 11-2 favourite came home four and a half lengths in front of ‘Poquelin’, with ‘Hold Em’ third and ‘Ballyfitz’ fourth. The seven year old bay travelled comfortably throughout the two and a half mile race to scoop the lion’s share of the £150,000 prize fund. More reasons to celebrate followed when two hundred people in the Club Enclosure took advantage of a full £30 ticket refund, promised to them if the Irish won the big race.

Friday’s hugely popular Countryside Raceday with its traditional country fair atmosphere featured the unique Glenfarclas Cross Country Steeplechase – a course combining hedges, banks and timber rails over a distance just short of four miles. Irish horses have dominated this race in recent times, this running being no exception. Favourite ‘Garde Champetre’ powered home to an outstanding success when given a confident ride by jockey Nina Carberry, beating stablemate ‘Headsontheground’. Sporting the well known green and gold colours of legendary gambler JP McManus and trained by Enda Bolger, ‘Garde Champetre’ follows in the footsteps of four times winner (2004 – 07) ‘Spotthedifference’, owned and trained by the same duo. Although ‘Garde Champetre’ may now return to Cheltenham for the cross-country race next month, he is not expected to run in the Grand National in April. Read more> http://www.horsesinthesouth.com/article/article_detail.aspx?id=8878