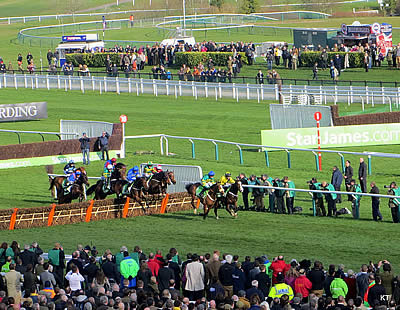 The 2020 Cheltenham Festival gets under way on March 10, 2020. Here is all the information you need ahead of the four-day spectacular.  The race prize money is second only to the Grand National and you also have several Grade I races, including the Cheltenham Gold Cup, Champion Hurdle, Queen Mother Champion Chase, and Stayers’ Hurdle, held over four days. The meeting usually coincides with Saint Patrick’s Day, and is particularly popular with Irish visitors.

Large amounts of money are gambled during Cheltenham Festival week, with hundreds of millions of pounds being bet over the week.  To assist you, go to the best Cheltenham festival betting offers for 2020.

Punters should know that when picking a Cheltenham Festival winner, there are several races which serve as key indicators for the Cheltenham Gold Cup, including the Charlie Hall Chase at Wetherby, the Betfair Chase at Haydock, the King George VI Chase at Kempton, and the Denman Chase at Newbury, to name just a few. Results in these races act as a good base to predict the outcome for those looking to bet on the Cheltenham races themselves. Horses who tend to perform well in these races go on to perform well in the Gold Cup, so be sure you study the form book.

Owners have been known to purchase horses with the specific aim of achieving a winner at the festival.  Cheltenham Gold Cup finish has an exhausting climb to the line.  Some horses are suited to the course better than others.

The festival also includes one of the two biggest Hunter Chases of the season, the Foxhunters’, which is run on the Friday over the same course as the Gold Cup.

The course based in the outskirts of Cheltenham in the village of Prestbury is the home of national hunt racing and has three left hand tracks, the Old Course, the New Course, and the Cross Country Steeplechase course.

The beauty of National Hunt racing is that the stars of the show have longer careers than those who run on the Flat, meaning that they return to the festival over several seasons, and build a real rapport with those who follow the sport.

The number and type of races at the Cheltenham Festival has changed dramatically over the years of its existence. In particular, it has grown from a two-day meeting to a four-day meeting. In 2019, there were 28 races.

Each of the four days of the Cheltenham Festival is headlined by either one or two Championship races, which consist of the Champion Hurdle (Tuesday), the Queen Mother Champion Chase (Wednesday), and the Stayers’ Hurdle and the Ryanair Chase (Thursday), before culminating in the headline race of the entire week, Friday’s Cheltenham Gold Cup, which saw Willie Mullins break his 6 runners-up with a win by 2 ½ lengths.

Tuesday, the Champion Day, is the opening day of the Cheltenham Festival and is packed with top quality horses and starts with a bang with the best young hurdlers.

Wednesday, Ladies’ Day, is headlined by the Queen Mother Champion Chase, consisting of a fine blend of speed and stamina for a two mile run. The Cross Country Chase gets better by the year, with dual hero Tiger Roll famously going on to claim Grand National glory at Aintree on both occasions.

The St Patrick’s Thursday crowd has every reason to celebrate with a couple of strong Grade One contests in the Stayers’ Hurdle and the Ryanair Chase. Then you’ll have the Marsh Novices’ Chase (formerly the JLT) while the Pertemps Network Final provides a huge field scrap for hurdling over three miles.

On Friday, one of the most sought-after titles in racing is decided on the final day of the Festival. The Magners Cheltenham Gold Cup is a race associated with the elite of the sport and nothing can rival the Cheltenham roar as the horses charge up the famous hill.  The JCB Triumph Hurdle and Albert Bartlett Novices’ Hurdle also produce top-class talent. The Martin Pipe Conditional Jockeys’ Handicap Hurdle is the 28th and final race of the Festival.