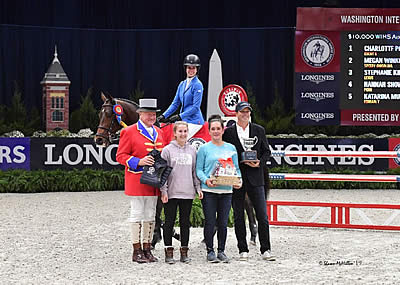 Washington, D.C. – Jumper riders took their turn in Capital One Arena during the second day of competition at the 61st Washington International Horse Show (WIHS) on Wednesday, October 23. WIHS continues through Sunday, October 27, with coveted hunter, jumper, and equitation competition in the heart of Washington D.C.

As Charlotte Powers watched the last rider jump off in the $10,000 WIHS Adult Jumper Championship and realized she had won, she jumped up and down and hugged her sister and trainer, Justine Powers Jarvis. Powers claimed the blue aboard her own Escot 6, turning in a clear round in 31.59 seconds to defeat the six other riders who had qualified for the jump-off out of the starting field of 26.

Megan Winkhaus claimed second place riding Speedy Chicolina with a clean jump-off round in 33.78 seconds, while Stephanie King guided Lexus to a four-fault jump-off effort in 30.84 seconds for third place.

Both Powers, of Ashburn, VA, and Escot 6 are new to the jumper ring. Powers showed in the hunters and equitation as a junior but took a step back from showing while she went to college and graduate school for her PhD in organizational psychology and started her career in human resources. She also spent a year and a half working in the United Kingdom. For those years, she kept riding, but did not show. When she moved back to the U.S. in October 2018, she told Jarvis she wanted to get back into the show ring.

“It’s been 10 to 15 years since I’ve seriously competed,” she said. “This is my first year back and first year doing the jumpers. The speed was a big difference! I’d always been told I go too slow, my whole career. This has been a change of pace.”

Escot 6, a 13-year-old Hanoverian, evented to the four-star level with Colleen Rutledge riding but switched careers.

Caroline Nadalin Takes the Inside Track to Victory in the $10,000 WIHS Children’s Jumper Championship

A tough inside turn proved to be the key for Caroline Nadalin and Boujis to win the $10,000 WIHS Children’s Jumper Championship. It was a turn that hadn’t worked out for a couple of the nine jump-off qualifiers from the original starting field of 25.

The move resulted in a clean round in the winning time of 34.75 second, more than a second faster than second-placed Katalena Prusso on Camera Ready, who stopped the timers in 35.95 seconds. Stella Propp took third riding Baral Preciosa with a time of 40.94 seconds.

“This win is super exciting,” said Nadalin, from Plain City, Ohio. “We’ve been trying to qualify for these [year-end championships] all year.”