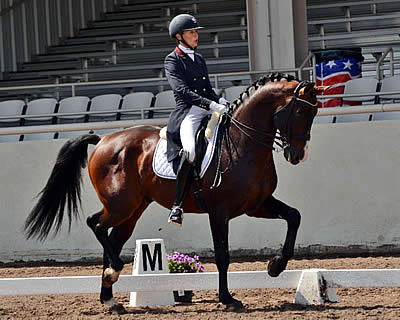 (Rancho Santa Fe, CA) June 6, 2014 – Charlotte Jorst is well on her way to making her dreams come true as she heads to Gladstone with two incredible stallions, Nintendo and Vitalis.

With Nintendo, the eleven-year-old Dutch Warmblood stallion owned by her Kastel Denmark activewear company, she will compete in the 2014 U.S. Dressage Festival of Champions presented by The Dutta Corp/Selection Trials for the 2014 Alltech FEI World Equestrian Games US Dressage Team Short List.

With Vitalis, Kastel Denmark’s seven-year-old Dutch Warmblood stallion, she will ride for the 2014 Tim Dutta National Intermediaire I Championship.

Only two weeks ago, her dream to qualify for Gladstone seemed headed for heartbreak. “All these things kept happening to prevent us competing in the final qualifying competitions we originally planned,” Charlotte remembers. “That’s life with horses; things always happen! But you know, sometimes you can’t change the things that happen – the only thing you can change is your attitude.”

Charlotte and Nintendo have been competing together only since early this year. Before Charlotte imported him from Europe at the end of 2013, Nintendo had been only lightly competed at Grand Prix. Charlotte began building their partnership even as they earned qualifying scores during an intense two months at the CDI-W Capistrano Classic and CDI3* Festival of the Horse in California and the CDI3* Paragon Dressage in Colorado, during which their individual scores climbed from 62.689% to a high of 70.650%.

Vitalis is another horse with whom Charlotte quickly built a strong competitive record. After she imported him in 2013, they posted the highest ever USA qualifying score average of 9.192 at the Markel/USEF Western Selection Trials; placed 13th for the USA at the FEI Breeding Championship for Young Horses, 6-year-olds, at Verden, Germany; and won the 2013 Markel/USEF Developing Horse National Championship presented by HorseShow.com with a final score of 9.152 including two perfect 10s.

Advice from Robert Dover, US Dressage Technical Advisor/Chef d’Equipe, during a clinic in February of this year set Charlotte on a new course. “He told me I needed to train with Guenter Seidel,” recalls Charlotte. “So I moved my horses into Guenter’s barn and we’ve been working consistently ever since.”

“Charlotte is very determined,” Guenter reveals, “and she has a very good attitude. That’s the main thing you have to have, because with horses there are so many things that happen, issues that you have to overcome. She has very, very good horses, and she puts in the daily work, consistently. You have to put in the daily work; without it, you can’t succeed. And Charlotte has good nerves – she can concentrate and make things work. She has as good a chance as anyone on the list to go to Europe and compete for a spot on the team.”

Support from her family is every bit as valuable to Charlotte, as she balances her commitments to her horses’ training and their intense competition schedule with the growing success of her cool and stylish activewear business, Kastel Denmark. Charlotte’s husband of 25 years, Henrik, and daughters Christine and Camilla, are the heart of her success. She says simply, “I couldn’t pursue my dreams for my horses and my business without them. I am grateful beyond words for their incredible love and support.”

Follow Charlotte on Facebook where she posts photos and news, and see new photos of her latest cool and stylish activewear at www.kasteldenmark.com. Watch the USEF Network at www.USEFNetwork.com for results of the 2014 U.S. Dressage Festival of Champions presented by The Dutta Corp/Selection Trials for the 2014 Alltech FEI World Equestrian Games US Dressage Team Short List and the 2014 Tim Dutta National Intermediaire I Championship.