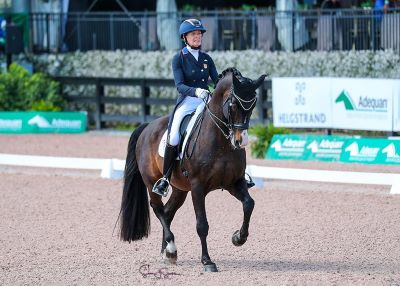 Wellington, FL – Two high quality grand prix classes set the tone on the opening day of week five of the 2022 Adequan® Global Dressage Festival (AGDF) in Wellington, FL. Charlotte Jorst (USA) rode her own Kastel’s Nintendo to 72.579% and the top spot in the World Cup™ short Grand Prix, presented by Wellington Equestrian Realty. At 18 years old, the stallion by Negro was the oldest in the field of 11 starters and emerged the unanimous winner across the five judges.

Duos with firm partnerships were the order of the day in this class. Second-placed Brittany Fraser-Beaulieu scored 71.895% on her long-time partner All In for second, while Spain’s Juan Matute Guimón finished third on Quantico with 70.447%.

“Nintendo feels better and better all the time,” enthused the 55-year-old Danish-born American rider, whose previous competitive outing with the horse was at Aachen, Germany in September 2021. “He’s more and more in front of my leg, he’s more and more up, and he loves the job. He’s so excited to be here; he’s happier than a clam.

“I think the two pirouettes with the one-times in between [were the highlight of the test], because he’s so straight in those ones and those pirouettes — you can come up that centerline and things just happen right after the other in this test. It was just wonderful,” added Jorst, who was riding the modified short version of the grand prix test in competition for the first time with Nintendo.

“I think it’s fun to do another test,” she said. “It’s fun that you do the canter depart and then up the centerline and you have to do the zigzag. The test is kind of nifty, so I’m good with it.”

Frederic Wandres (GER) and Bluetooth OLD won the Grand Prix CDI4*, presented by Helgstrand Dressage. They emerged triumphant from the 10 starters to put an unassailable 73.565% on the scoreboard, with a high mark of 75.435%. The pair remains unbeaten in all three of their starts at AGDF 2022 so far.

“In week one he was a little bit tired,” said the 33-year-old, who works for Hof Kasselmann in Germany. “Today it was a little bit the opposite. I felt like he was more fresh, and I really liked that. Last time I competed in the World Cup Grand Prix and that’s a completely different test, completely different lines. I thought maybe I should go back once to the normal grand prix version, because all the last shows I did the short grand prix.

“Bluetooth is still a young grand prix horse, so it’s not always so easy to switch between these tests. And the normal grand prix version, which we rode today, is a very difficult test; we know that all. I think he’s overall a very elegant and shining horse with no real weak points. For sure the extensions and the piaffe/passage are something he developed very well,” added Wandres, who had a mistake in the one-time changes is an otherwise harmonious performance.