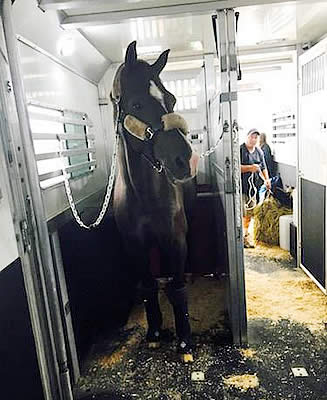 Joining Bellissimo, Dujardin, and Bloomberg were representatives from Gallop NYC and Mini Horse Heroes who spoke about how their charities benefit from the Rolex Central Park Horse Show, as well as Cynthia Richardson, President of the Arabian Horse Association. Officers from the New York City Parks Enforcement Patrol Mounted Auxiliary Unit were in the ring, Land Rover vehicles and mini vehicles were on display, and Frederik the Great: The World’s Most Handsome Horse gave a demonstration.

“We would like to welcome equestrian fans to New York City for what we think is a spectacular week in the world of horse sport,” Bellissimo stated. “With this backdrop, it is one of the more amazing places in the world, and we are so excited to make this one of the premier equestrian events on the world circuit.

“We have world-class competition with some of the top Olympic athletes in their respective sports,” Bellissimo continued. “We also have some special guests, including three-time Olympic gold medalists Charlotte Dujardin and Valegro,” Bellissimo continued. “They are the most accomplished horse and rider combination in the history of dressage, and we are very excited for her to take time out of her busy schedule to be here.”

U.S. Open Dressage, presented by Axel Johnson, will be featured this week on Friday, September 23, and Saturday, September 24. In a very special appearance, Dujardin and Valegro will perform a freestyle demonstration on Saturday evening. Valegro arrived in New York courtesy of Horseflight.

In her opening remarks, Dujardin stated, “It is always a huge privilege to come back here and be a part of this show again. I came last year and rode Evi Strasser’s horse and did a display. To be back here this year and have Valegro here for everybody to see in person is wonderful. Not many people get to see him live. I think it is great for the sport that the fans get to see him, and it is great for me that I can come here not in a competition mind and have a more relaxed time with no pressure. Doing the freestyle on Saturday night will be great fun for me. It is always really good to come here and ride with such an incredible backdrop, and I have to thank Mark, and his wife Katherine, and all of the sponsors for making this happen.”

On Friday evening, the U.S. Dressage Team, which won the bronze medal at the 2016 Olympic Games in Rio, will be honored in a ceremony to celebrate their accomplishment. The U.S. Show Jumping Team, which earned a silver medal in Rio, will also be honored, as team members McLain Ward and Kent Farrington are set to compete. Joining the celebration as well is Phillip Dutton, who won the Individual Bronze medal in Eventing for Team USA.

Also on the show jumping roster is hometown girl Georgina Bloomberg, who is one of the top riders in the U.S., and won the inaugural grand prix in Central Park in 2014.

Bloomberg stated, “This is definitely a huge privilege to be able to ride here. This is where I grew up; it is the best city in the world, and to have a top level competition back in this city means a lot to me as a New Yorker and as a show jumper. This has become a premier event on the fall schedule for many show jumpers, and we have some really exciting competition here with some of the best show jumpers in the world. The only thing that was better than competing here was winning here, so I will definitely be aiming for that again this year. Thank you to Mark and Katherine, and Michael Stone, and everybody else that is involved with putting this event on in Central Park. It is definitely worth it for the riders, and we really appreciate it.”

Tickets for Friday night are sold out, and less than 100 tickets are available for Thursday and Saturday nights! To get yours, go to http://bit.ly/29LwkkD.