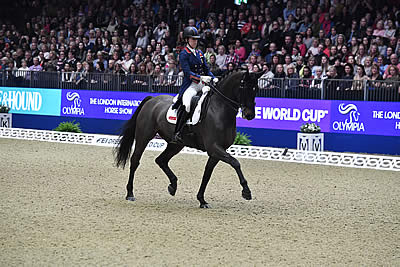 Charlotte Dujardin CBE and Carl Hester MBE have confirmed that they will be bringing their best horses, Mount St John Freestyle and Hawtins Delicato, to Olympia, The London International Horse Show, and with the 2020 Olympics fast approaching, the Show will form an important part of their Olympic preparations.

Mount St John Freestyle will be making her competitive debut at Olympia, and having picked up two bronze medals at the 2018 FEI World Equestrian Games, is widely regarded as one of the favourites for Tokyo 2020, bidding to win Dujardin a fourth Olympic Gold.

Announcing her participation, Dujardin said: “I am absolutely thrilled to be returning to Olympia for 2019. Being able to compete on Mount St John Freestyle at the Show for the first time is incredibly exciting and will also provide a valuable stepping stone ahead of the 2020 Olympics. The audience at Olympia is incredible and will prepare us for the crowds in Tokyo.”

Dujardin’s 2018 Olympia ride, Hawtins Delicato, will be back with regular partner Carl Hester, rekindling the formidable partnership that won them team bronze at the FEI World Equestrian Games in 2018 and FEI Dressage Nations Cup team gold in Compiègne, France earlier this year.

“Olympia is the show I look forward to every year and this December I’ll be competing on Hawtins Delicato,” said Hester. “Performing under the roof of Olympia Grand is always such a unique experience and the crowds are so encouraging. It’s exciting to see the revised new format take shape and to see the Show coming up with new and innovative ways of connecting with the audience. I know this year will be a huge success!”

Organisers have reviewed the format of the Grand Prix since last year and have taken the most popular elements from 2018, such as live interviews with the competitors in the arena immediately after their test as they watch the scores come in. The test itself has also been updated, with all the classic Grand Prix characteristics present and attention paid to maintaining the flow of the movements whilst also demanding the highest level of technical ability, athleticism, and precision to satisfy FEI Dressage World Cup standards and qualification requirements.

Richard Davison, Dressage Consultant to the Olympia Organising Committee, who has been working together with the FEI on the project, commented: “We have been working hard to develop a concept which maintains the FEI Dressage World Cup Grand Prix as the ultimate technical test which reflects the highest degree of difficulty, whilst also widening its appeal to new audiences. The aim is to strike a balance for both competitors and fans and this pilot marks a significant step in achieving our goals.”

Simon Brooks-Ward, Show Director, said: “We are always looking for ways to make the action at Olympia as entertaining, dynamic, and educational for our audience as possible.  We are confident that the second year of the Dressage Grand Prix pilot will be met enthusiastically by our audience. Not only do we have the competition, but we are also introducing ‘Dressage Unwrapped’ hosted by Carl Hester, Richard Davison, and Gareth Hughes which gives a 90 minute deep dive into dressage and what it means to compete at an international level. The whole evening is set to be a feast for dressage enthusiasts.”