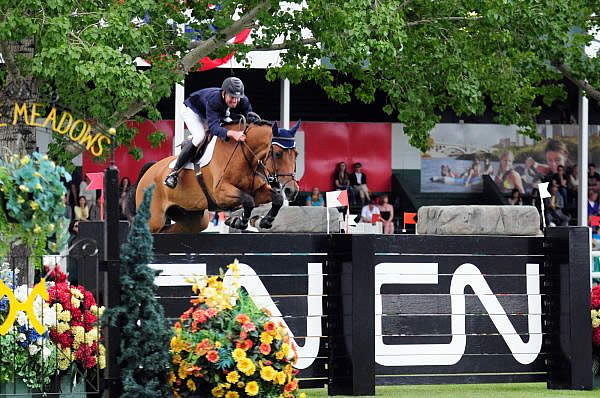 The week’s highlight event gathered a large crowd at the international ring as they watched the top show jumpers compete over the technical track designed by Werner Deeg of Germany. Only four horse and rider combinations managed to best the first round, the second of which was Jacobs aboard his 14-year-old Swiss Warmblood gelding by Fairman owned by CMJ Sporthorse LLC, Flaming Star.

When Jacobs returned for the tiebreaker, he opted for the tidy route, which paid off when he crossed the finish line aboard Flaming Star, all the rails intact and the clock stopping at 53.62 seconds. Professionals Kent Farrington and Reed Kessler managed to beat Jacobs time later in the jump-off, but his effort held up for the third place honors as the United States swept all three of the top positions.

“It was amazing,” expressed Jacobs. “There were four that jumped clean, and the course was very solid. It was a meaty track and it caught people at different places. I was ecstatic to jump clean in the first round, and when I came back second in the jump-off I went tidy, but not to the wall fast, and was clear, but then those two came in and were faster.”

Unlike Farrington and Kessler, Jacobs has a fulltime job in Boston with the Boston Bruins hockey team. He does not have the option to ride as much as he would like, but he still manages to compete with the best in the world.

“I love to ride, and I think it speaks volumes about the support that I have not only from my wife and kids but also the team that looks after the horses and rides them at Deeridge when I can’t be there,” he explained. “It’s great to be part of the team with all the people at Deeridge.”

Jacobs added, “Flaming Star is a great animal. He’s a quirky little guy and has particular things that he likes. If you get to know him well enough though and form a partnership, he gets done what needs to get done. He’s all heart and he’s a real competitor; he always goes for it.”

Jacobs will compete again in a few weeks with Deeridge Farms at the Lake Placid Horse Shows in New York before heading to Traverse City, Michigan for Horse Shows by the Bay.