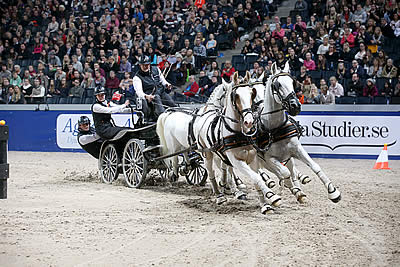 Stockholm (SWE), 30 November 2015 – Dutchman IJsbrand Chardon won the third FEI World Cup™ Driving leg yesterday at the Swedish International Horse Show in Stockholm. But it did not come easy for the four-time World Champion, as he had to stop for a moment when one of his wheeler horses caught a leader rein under its tail. Young drivers Michael Brauchle (GER) and József Dobrovitz Jr. finished second and third.

Over 15.000 spectators witnessed the exciting competition between the six drivers in the Friends Arena where Swedish course designer Dan Henriksson built a technical course with three marathon type obstacles and a bridge.

Chardon was last to go in the first round and put down the first clear round of the evening. He was over nine seconds faster than his closest rival Michael Brauchle.

He started off very controlled in the winning round and aimed for a safe round. “In the first round my team went super; the feeling with them was fantastic,” he said afterwards. “In the winning round I had to stop in one of the marathon obstacles after the right wheeler horse had caught the rein of the right leader horse. It really got stuck and I couldn’t move it so I had to stop,” he explained. Chardon’s groom managed to solve the matter quickly, and in the end the Lipizzaners passed the finish line despite one knock down with a six-second advantage over Brauchle. It was the first time in Chardon’s career that he has won the FEI World Cup™ Driving leg in Stockholm.

Michael Brauchle flew through the course in the first round, but lost time in the marathon obstacles. He went wide around and touched an element, which caused a ball to fall. The reigning European Champion went even faster in the winning round and stayed clear, finishing one second ahead of Dobrovitz Jr. “This was my second start in a World Cup competition this season. I was very happy how my leader horses worked together. I competed in Stuttgart last week as well, but this arena is a bit smaller so I had to drive a bit more carefully. I found the course technical and very good,” he said.

József Dobrovitz Jr. did very well in the first round, but in the winning round he lost accuracy and touched an element, which caused an unlucky ball. He lost precious seconds in the third marathon obstacle after he slightly went over a gate. “This was my first indoor competition this season and I decided to make some changes in the setup of my four-in-hand after the first competition on Friday evening. But I always dreamed about competing in Stockholm. I have been here before as a groom for my father and now I am competing here myself. I find it fantastic! The horses worked very well. I had one knock down in each round but that was not the fault of the horses. It was my fault,” he insisted.

His friends, German international four-in-hand drivers Christoph Sandmann and Sebastian Hess, assisted Georg von Stein (GER) on his carriage. Von Stein started off well, but he had a bit of miscommunication with the horses in one of the marathon obstacles and lost speed, so the 2014 German Champion finished in fourth place in Stockholm this year.

József Dobrovitz (HUN) finished fifth after he knocked two balls down in the second marathon obstacle and loosing time after making an extra circle in the third obstacle.

Wild card driver Axel Olin (SWE) finished sixth after tragically losing one of his horses on Friday night. Olin’s team had completed the round and the horses were walking towards the exit from the arena when his wheeler horse Filur collapsed. The veterinary team was very quickly on the scene to attend to the horse, but sadly there was nothing that could be done. An autopsy will be conducted to establish the cause of death.