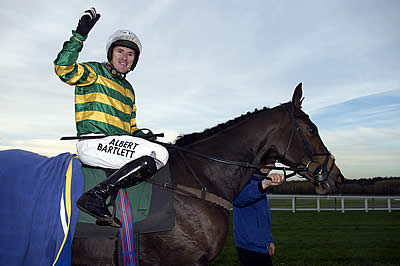 Champion jockeys AP McCoy and Richard Hughes are set for a showdown in a different sort of equestrian sport, as they go head-to-head in a show jumping challenge at Olympia, The London International Horse Show on Friday 19 December 2014.

The pair will head the line-up for the Markel Champions Challenge between jump jockeys and flat jockeys in aid of Olympia Horse Show’s official charity this year, The Injured Jockeys Fund. Joining McCoy in the jump jockey squad will be John Francome, Sam Twiston-Davies and Sam Thomas, whilst representing flat jockeys with Hughes will be Hayley Turner, Jim Crowley and Adam Kirby.

The jump jockey and flat jockey squads will take each other on in a show jumping team relay competition in front of a crowd of 10,000 during the Friday evening performance at the famous London Olympia Hall.

John Francome, who had a successful show jumping career as a teenager before becoming a professional jockey and is now President of the Injured Jockeys Fund, said: “Riding at Olympia is going to be good fun for us all. Of course it’s in aid of a great cause, the Injured Jockeys Fund, but that doesn’t mean it won’t be ultra-competitive! The jumps boys intend to show the flat jockeys just how it’s done.”

Flat jockey Hayley Turner, with her ever competitive spirit, has been busy brushing up on her show jumping skills by recently getting some extra tuition from top show jumper Ben Maher.

The Group 1 winning jockey said: “Having a jumping lesson with Ben has really helped get my eye in before Olympia. It’s a completely different style of riding to what I am used to. I am really looking forward to taking on the jump jockeys at Olympia. They may think they have the upper hand over the flat jockeys but we are taking this seriously so they want to watch out!”

This year’s Olympia Horse Show opens on Tuesday 16 December, with a packed schedule of equine entertainment set to take place throughout the seven day event. Living up to its reputation as one of Europe’s premier indoor equestrian events, Olympia Horse Show hosts World Cup competitions in Show Jumping, Dressage and Extreme Carriage Driving, as well as a feast of breath-taking displays, including the world famous Ukrainian Cossack Stunt Riders and the magnificent Mounted Branch of the Metropolitan Police with their Activity Ride. Once again, all the old favourites which make London’s premier horse show so magical, such as the Shetland Pony Grand National, the Kennel Club Dog Agility and the nail-biting Alltech Christmas Puissance competition will be back to delight the 90,000 visitors expected to attend this year’s show.

Olympia Horse Show will broadcast live on BBC2 on Sunday 21 December and available to view on the BBC Red Button, online and connected TV on Wednesday 17, Thursday 18 and Monday 22 December. In addition a special highlights program will be aired on BBC2 on Tuesday 23 December.

For more information and to purchase tickets online, visit the website at www.olympiahorseshow.com or telephone the box office on 0871 230 5580.

Olympia, The London International Horse Show
The first international horse show took place in the Olympia halls in 1907. Olympia, The London International Horse Show, the event we see today, was started by Raymond Brooks-Ward in 1971. This year’s show takes place on 16-22 December 2014 in the Olympia Exhibition Hall, located in West Kensington London. The show will play host to a packed timetable of all things equestrian and is expected to welcome over 90,000 visitors. It is regarded as one of Europe’s oldest and most prestigious equine competitions. The show mixes top class equestrian action, including FEI World Cup™ Jumping, Dressage and Driving with family entertainment, such as the Osborne Refrigerators Shetland Pony Grand National which raises money for Great Ormond Street Hospital and The Kennel Club Dog Agility. The show’s official charity for 2014 is The Injured Jockeys Fund. There will be a special class in aid of the Injured Jockeys Fund on Friday 19 December called the Markel Champions Challenge for the Injured Jockeys Fund.

The Injured Jockeys Fund
The Injured Jockeys Fund was founded in 1964 following the devastating accidents to Tim Brookshaw, and then Paddy Farrell in the 1964 Grand National. The Fund has since spent over £17m in helping over 1000 jockeys whose injuries have forced some of them to give up riding. The aim of the IJF is to maintain this ethos with continuing support for existing beneficiaries and to provide immediate and effective help to all newly injured jockeys in whatever way is appropriate to ensure a reasonable quality of life for them and their families. The IJF has two respite and rehabilitation centres, Oaksey House in Berkshire, opened by Patron HRH The Princess Royal in 2009, and Jack Berry House in Yorkshire, set to open in the Spring of 2015. www.ijf.org.uk

Markel International
The Markel name and reputation are unsurpassed in the field of equine insurance. For over 50 years, Markel has provided uninterrupted coverage for horses and horse-related risks. Coverage is available for the widest range of needs from individual horse owners up to the largest global Thoroughbred breeding and racing operations, through to disciplines such as dressage, show jumping, reining, trotters and Arabians. www.markelinternational.com/equine