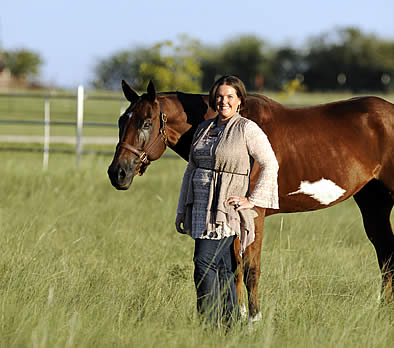 Jessica Hein, posing with her horse Ozzie, will be sending her Western Dressage Test for a Ride-A-Test review with Cesar Torrente, FEI 3* dressage judge, thanks to the AHP. (Photo by Laura Stevens, courtesy of APHA)

Colorado Springs, CO (July 3, 2013) – Colombian National Champion dressage rider and FEI 3* judge, Cesar Torrente, contributed his expertise to the American Horse Publications Student Fund by donating a Ride-A-Test judging package for the silent auction hosted during their annual seminar recently held in Colorado Springs, CO.  His Ride-A-Test contribution provided an opportunity for the highest bidder to submit a video of a ride to be judged and critiqued by Torrente as if he were watching from the judge’s stand at an FEI level show. Torrente recognizes the value of sharing information and education through the media. He was very proud to support the AHP Student Fund, which encourages young people who want to become a part of the equine media and publishing industry, but judging this Ride-A-Test may not be a “cinch”!

Jessica Hein, Editor at the Paint Horse Journal, was the highest bidder and was thrilled to win the prize. “I bid on this item because I thought I could gain some insight into my dressage tests from Mr. Torrente’s critique,” Hein explained. “I am new to dressage, so I thought this would be a cost-effective means of getting some feedback and suggestions.  I have been riding Western dressage for about a year and a half, and before that, I was primarily a hunter-jumper rider,” she continued.  Hein described that she typically rides Training Level and First Level dressage, and her coaches are traditional dressage instructors and riders.  However, she was hoping to submit her video riding a Western dressage test and have Torrente base the critique and judging on traditional dressage standards.  “I would like to get some feedback on our maneuvers and suggestions on ways we can improve our scores, or even get some ‘homework’ that might help us improve,” she said.  “I’m excited to have won the donation.  I am thankful for the AHP and thankful for the opportunity to learn from Mr. Torrente!”

Torrente has been described as the quintessential “rider’s judge.”  His compassion for the competitor comes from the fact that he is an active Adult Amateur rider in Colombia and also has vast experience competing at the international level, representing Team Columbia in the Pan Am Games and Central American Games on more than 4 occasions.  An attorney by profession, Torrente is committed to ethical judging and leaving the competitor with constructive remarks that will enable them to make improvements and encourage them to continue the never ending journey of dressage training. And Torrente’s own journey of dressage will head west as he applies his expertise to Jessica Hein’s western dressage test!

Torrente’s valuable contribution to the AHP Student Auction comes on the heels of his becoming the first FEI 2* Judge to be promoted to FEI 3* through the new, and very rigorous FEI system.  Torrente has been working toward the honor of this new promotion for over 2 years by participating in the Education System for FEI Judges, which was established by the FEI in July 2010. This elaborate system, which has a prerequisite of showing at the FEI level, required Torrente to comply with Judges Seminars, Shadow-Judging, FEI Qualification Courses for his promotion, and Refresher Seminars to maintain his status, all while being supervised by the Dressage Committee and the FEI.  “It has been a very time consuming journey that has taken me to so many countries, seminars and courses,” Torrente says, “It has been a wonderful experience to sit and learn from the best judges in the world on different continents.  As a result, now I can judge up to Grand Prix level in FEI CDI’s and in National Competitions as well,” he adds.  He is excited to be able to use his new status in many ways to support and encourage dressage riders at all levels, young or old, who share his same passion for the sport.

Torrente’s official promotion date was July 1, 2013, and he is currently booking judging dates for the remainder of the year.  For more information, contact Cesar Torrente at cesartorrenteb@gmail.com or by phone at (0057) 310-236-5702.