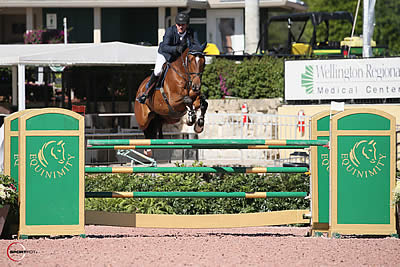 With their share of $35,000 on the line, Ariani‘s mount Ukulman de la Nutria was fast across the ground and careful over the fences to top a six-horse jump-off over courses designed by Eric Hasbrouck of the United States. The pair will now focus on the $75,000 Rosenbaum PLLC Grand Prix, which takes center stage on Sunday, January 13.

“He is from Mexico and it’s the system there to break them at five or six, but for some reason he was in pasture for a little longer,” said Ariani. “I was very happy with his results over the last year and I have a lot of expectations for him. I believe he can become a very important horse.

“He has a huge stride and I was confident in the jump-off because it was a long track,” continued Ariani. “The last line was seven or eight [strides], but I believed he could do it in six and he did!”

Scott Stewart returned to the Winter Equestrian Festival in winning form as he secured the championship in the Equine Tack & Nutritionals Green Hunter 3’6” division during Week 1. Stewart piloted new mount, Bright Side, to an easy victory as the pair was awarded two firsts, a third, and a fourth over their courses.

“We weren’t sure we were going to show him this week, but he was so good in the warm-ups on Tuesday that we decided to jump right in,” commented Stewart. “Since I don’t know him very well, I just had to trust him. He went right out there and handled it exceptionally well.”

Stewart, of Flemington, NJ, is new to the eight-year-old Dutch Warmblood gelding (Ultimo x Tiara), who was purchased as an Adult Amateur 3’6” horse for his client, Stephanie Danhakl, only several weeks ago. Previously owned by Mountain View West Farm, LLC, the gelding has extensive Adult Amateur and Performance Hunter placings on the west coast.