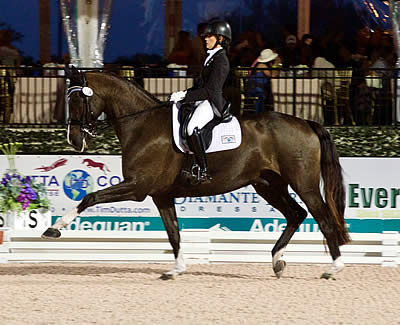 Wellington, Florida (March 29, 2017) – Sean Sierra Keasler of Wellington, Florida closed out her 2017 CDI season on Friday, March 24 with a silver medal, champagne soaked shadbelly, and the realization of a career goal: to ride for the US in a Nations Cup. Aboard her own Danish Warmblood gelding Lux Stensvang (Lobster x Verona Stensvang x Diamond), Keasler was awarded Individual Silver for her CDIO U25 Freestyle on Friday and Team Gold during the CDIO Intermediaire II team competition on Wednesday, along with Team USA members Anna Buffini with Sundayboy and Kerrigan Gluch with HGF Brio. Team USA’s historic success at the first U25 Nations Cup in North America and the international camaraderie of all the countries represented speaks of a bright future for the sport.

“As soon as I heard the news that Wellington would be having a U25 Nations Cup in 2017, that became my goal for this season,” said Keasler. “It has been a dream of mine to ride under the lights here at Global, and to experience the team spirit of a Nations Cup competition. Lux felt great in the Freestyle; the highlight for me was just after the first canter tour and an extended trot, as we were coming through the short side I felt him really start to swing to the music and relax into the rhythm. In that moment I felt like ‘Okay, this is what it’s all about; this is riding a Freestyle,’ and that was a great feeling.”

Earlier in the week, Keasler and Lux put in a supporting score of 67.263% in the CDIO U25 Intermediaire II on Wednesday to boost Team USA to Gold in the Team Competition. Thursday’s CDIO U25 Grand Prix class saw the pair finish just out of the medals, with less than a percentage point separating third (Bronze) with fourth and fifth place. Keasler noted that while Lux’s abundance of energy had affected their performance earlier in the week, the pair seemed to hit their stride in the Freestyle.

“I was paying very close attention to how he felt in the warm up [on Friday], and he felt really good as we prepared to enter the stadium. My strategy going into the Freestyle was to do as many tempi changes as possible,” laughed Keasler. “The changes are really his forte and what he enjoys, so I knew it was to our advantage to do as many as we could. It’s really an honor to be able to ride in this fantastic competition with a team atmosphere; the Nations Cup is so important and having one for the U25 Grand Prix riders is such great experience for those of us who dream of competing on that level. I can’t thank the USEF, show organizers, and show sponsors enough for hosting this event, and am forever grateful to my horse, Lux, for carrying me here. I’d also like to thank everyone who has helped me every step of the way: my parents Sean and Andrea Keasler, my grandfather Pete Anderson, coach Silke Rembacz, sponsors, and team for supporting me, our Chef d’Equipe Debbie McDonald and my teammates who’ve all contributed to making this dream a reality, and Caroline Roffman of Lionshare Dressage for giving me the ride on Lux that began our career.”

Keasler began her advanced dressage career in 2011 as a successful Junior competitor at the NAJYRC. She spent almost 5 years as a working student for Lionshare Dressage in Wellington, Florida, where she honed her skills as a Young Rider and eventually came to purchase Lux. She placed in the top 5 at Nationals that year, and quickly progressed to the FEI level, earning her USDF Silver Medal after competing Hyperion Farm’s Corcovado at Prix St. Georges. She and Corcovado were also the Fourth Level Young Rider Region 3 Champions in 2014. In 2015 she earned the ride on Lux Stensvang, and in their first outing at Grand Prix scored 72.9%. That same year they successfully competed in the U25 Grand Prix at the Adequan Global Dressage Festival and were the Reserve Champions in the 2015 Brentina Cup. In 2016 she began training with Silke Rembacz, and again campaigned Lux in the U25 Grand Prix, culminating in a 4th place overall finish at the 2016 US Dressage Finals. Lux and Keasler are also active participants in the USEF’s Select Athlete One-on-One Coaching Program, and recently took advantage of her first training sessions with FEI Judge Charlotte Bredhal. This season she and Lux were victorious in the U25 Grand Prix during the Palm Beach Dressage Derby, and with a Team Gold and Individual Silver under their belt, Keasler plans to continue to develop her international dressage career.