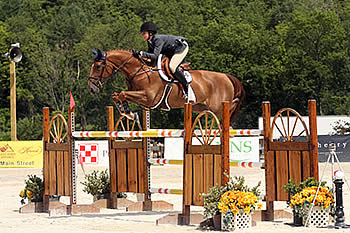 “Everything clicked automatically when I went in the ring yesterday (in the 1.30m Jumpers),” Tyree explained.  “I was already feeling confident yesterday so going in the ring today I knew he would take care of me, no matter what.”

Tyree, 18, of Chicago, IL, follows in the footsteps of grand prix veterans Peter Wylde, Darragh Kenny, and McLain Ward, all of whom have formerly campaigned Sandor de la Pomme.

“It was very intimidating (showing him for the first time),” Tyree acknowledged.  “He’s shown with all these huge-name riders, and now I have him.  I was definitely nervous going into the ring the first time, but all of that has worked itself out.”

Despite their short relationship, Tyree can already feel their partnership forming.  The pair posted the only double clear round of in Thursday’s $10,000 Overland Sheepskin Company Welcome Stake after multiple riders ran into trouble throughout the course designed by 1984 Olympic team gold medalist Conrad Homfeld of Wellington, FL.

“The course was a lot more technical than I thought it would be,” said Tyree.  “I got to ride it when I did the low amateurs, so I had a feel for it.  But when the jumps went up, it was a little more difficult.”

Tyree first attempted the course with Don’t Go, but had a rail down to miss qualifying for the jump-off.  When the time came for Tyree to enter the ring with Sandor de la Pomme, she found herself at ease knowing she could trust her mount’s talent.

“He’s so game and he’s got a big heart.  He’s careful.  He’s correct.  He always wants to do the right thing.  With him, I just have to trust that he knows what he’s doing.  He’s jumped plenty of big classes, so I know I don’t have to worry about him.  It’s a nice feeling to have going into the ring,” Tyree remarked.

Going late in the order, Tyree knew she only had to go clear to win the class, which was especially reassuring since she didn’t want to push too hard with her new partner.  The best performance so far had been turned in by Hillary Simpson, who incurred four faults in the jump-off with Nopus du Gue Joubert.

“I knew there were no clears (jump-off rounds) and this was only my second jump-off with him, so I wasn’t planning on going too fast,” said Tyree of the immediate jump-off format.  “I just wanted to make sure I was neat with my turns and gave him a chance to leave the jumps up.”

Tyree is grateful for the opportunity to ride Sandor de la Pomme so early in her budding amateur career, describing him as the most talented horse she’s ever been fortunate enough to ride.

“I’m very happy I get to have a horse like him; I never thought it would happen,” smiled Tyree, who trains with Missy Clark and John Brennan of North Run Stables in Warren, VT.  “Missy and John suggested it to my parents and I never thought they would go for it!”

She continued, “Missy and John knew right away that it would work well, so I just had to have faith in them that they know what they’re doing.”

Clark and Brennan were clearly on to something, as demonstrated by Tyree’s victory.  Tyree and Sandor de la Pomme will continue to compete at the Vermont Summer Festival for the next two weeks and plan to contest a few grand prix classes.

The Vermont Summer Festival hosts its fourth week of competition at Harold Beebe farm this week and will continue through August 11. The six-week circuit, celebrating its 20th anniversary in its current Manchester location, offers more than $750,000 in prize money, making it the richest sporting event based on purse in the state of Vermont.