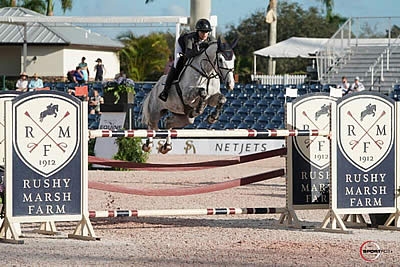 Out of the 45 entries in the $50,000 Rushy Marsh Farm Grand Prix CSI 2*, 11 went clear to contest the jump-off. As the final competitor to enter the jump-off, 25-year-old Catherine Tyree (USA) rode Mary Tyree’s BEC Lorenzo to the top time of 40.05 seconds.

She was chasing a time of 40.24 seconds set by Lacey Gilbertson (USA) and Seabrook LLC’s Baloppi, who would settle for second place. Third place went to Ali Wolff (USA) riding Double H Farm’s HH Venice Beach, who were clear in 40.35 seconds.

There were 47 entries in the $72,000 CaptiveOne Advisors 1.50m Classic on Sunday morning, all attempting to have a clear round to advance to the jump-off. Only nine were able to find that clear path and returned to contest the shortened course designed by Kelvin Bywater of Great Britain.

Riding out of the fourth spot in the order, Kristen Vanderveen and Bull Run’s Prince of Peace were able to speed around the jump-off clear in 39.42 seconds for the win. Second place went to Darragh Kenny (IRL) on Kerry Anne LLC’s Important de Muze, who stopped the timers in 40.28 seconds. Shane Sweetnam (IRL) and Alejandro, owned by Sweet Oak, Spy Coast, Seabrook LLC, placed third in 40.58 seconds.

This was Vanderveen’s fourth FEI class victory at WEF 5. She and Bull Run’s Almighty won the Douglas Elliman Real Estate 1.45m on Wednesday and she picked up the win with Prince of Peace in the opening day 1.40m class. On Friday, she and Bull Run’s Faustino de Tili won the Bainbridge 1.45m Classic.

The Children’s Hunter Older division kicked off competition on the final day of week 5 at WEF in the FarmVet Ring 7 as 16 combinations contested for the champion ribbon. With a two-point lead over the division’s reserve champion, Hanna Lloyd and Google It produced 22.5 points across the division to earn the champion title.

Lloyd teamed up with James Lala and Virginia Confer’s seven-year-old Dutch Warmblood gelding for the first time this weekend under the tutelage of trainer Jeff Di Carlo. With two first places and a fourth over fences and a sixth under saddle, they brought home the championship ribbon.