Lexington, KY, June 13, 2012 – The historic Shaker Village of Pleasant Hill in Harrodsburg, Kentucky will be the site of a trails conservation workshop associated with the Southeastern Equestrian Trails Conference (SETC).  SETC is a two-day conference established thirteen years ago, and will be held in Lexington, Kentucky on July 13-14, 2012. The Shaker Village workshop will be held on July 12, 2012 as an optional pre-conference offering.

Shaker Village is a National Historic Landmark on 3000 acres of rolling Central Kentucky farmland, located about 25 miles southwest of Lexington. The Village is managed as a private nonprofit.

While horses have been ridden on trails there for years, recently some unique partnerships established with the local Back Country Horsemen groups, as well as fox-hunting and driving organizations.  These partnerships have resulted in not only more trail mileage, but an appreciation by the Village management of the value of equestrian tourism, the enhancement of the historic atmosphere when horses are present, and the benefits of trail planning and maintenance when working closely with local horsemen.

END_OF_DOCUMENT_TOKEN_TO_BE_REPLACED 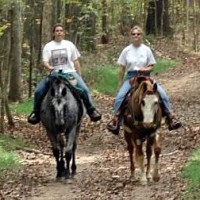 Do any of these fit your description?

If any of these descriptions fit you, then you will want to attend the Southeastern Equestrian Trails Conference on July 12-14, 2012 in Lexington, Kentucky.

END_OF_DOCUMENT_TOKEN_TO_BE_REPLACED 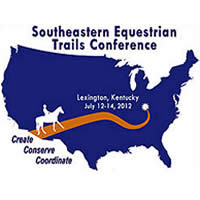 The Southeastern Equestrian Trails Conference (SETC) will be held in Lexington, KY in July.  This is the first time this conference has come to Kentucky!  We are excited to have this opportunity to host the conference and trail leaders from around the country.

For Kentucky trail riders, this is a unique opportunity to hear national speakers and to mingle with other trail leaders from the Southeast U.S. as well as around the country.

We want to have a good show of support from Kentucky, with a good turnout of Kentucky trail riders and leaders.

END_OF_DOCUMENT_TOKEN_TO_BE_REPLACED

Lausanne (SUI), 26 February 2012 – Dalma Rushdi Malhas, who made history by becoming the first Saudi female athlete to compete on the Olympic stage when she rode at the inaugural Youth Olympic Games in 2010, was amongst a high-profile group of speakers who addressed the recent IOC Women and Sport conference in Los Angeles (USA). The 20-year-old, who won individual bronze in Singapore, spoke of her hope of gender equality in all sports.

“I cannot yet compare myself to the riders of the Saudi First Team, but I am determined to give my best to reach their level one day, and prove that all women athletes, all over the world, should be given equal opportunities,” she said.

Twenty-four hours earlier, Malhas had received the loudest applause of the day after being invited onto the stage by IOC Executive Board member Nawal El Moutawakel of Morocco. Malhas, and then her mother, were brought on stage to demonstrate that female athletes from the Middle East can make their mark on the international sporting arena.

END_OF_DOCUMENT_TOKEN_TO_BE_REPLACED

Here is the revised schedule for our Las Vegas meeting. Please note there may be additional changes to our speakers.

10:45AM – 11:45AM – HOW TO TAKE AIM AND TARGET YOUR MARKET
Andrea Featherston-Rossi, Roanoke Design & Marketing

END_OF_DOCUMENT_TOKEN_TO_BE_REPLACED

Wellington, FL (February 7, 2012) – Zairo Interagro, a beautiful grey Lusitano stallion bred by Interagro Lusitanos, participated as a demonstration horse the during the USDF FEI-Level Trainer’s Conference with trainer Heather Bender. The USDF Trainer’s Conference was held at High Meadow Farm in Loxahatchee, Florida, and featured Christoph Hess, an FEI “I” judge in both dressage and eventing.

“I am so pleased that Zairo Interagro had the opportunity to represent the Lusitano breed during the Trainer’s Conference,” said Cecilia Gonzaga, the Managing Director of Interagro Lusitanos in Brazil. “Trainers from around the United States attended the conference, and this event was a wonderful opportunity to showcase the breed.”

Zairo and Bender took part in the Third level demonstration, working on flying changes and stretching over the back under the tutelage of Hess. “Zairo is a talented horse and a good representation of the Lusitano breed, which are known for their generous temperament and trainability,” Gonzaga said.

END_OF_DOCUMENT_TOKEN_TO_BE_REPLACED

The Women’s Horse Industry Network, the largest business network in the world for women working in the horse industry, will be hosting a Western States Meeting and Expo February 24-25, 2012 in Las Vegas. The event will be held at the LaQuinta Airport South. This will be the first time that women in the horse industry in the West will be able to gather together to exchange information, contacts and business.

The two day event will include exhibits from companies that produce and market products and services to the horse industry as well as a variety of panels covering all aspects from Using the Web to Grow Your Business to Holistic Horse Care and Proper Saddle Fitting. Some of the speakers lined up so far include: Cathy Ebsen, President of Web Services, Etc.; Savvy Emo, President of the Tack House; Charlene Hadwin, VP EasyMileLog and Owner of Equine Suites & Concierge; Andrea Featherston-Rossi, President of Roanoke Design & Marketing; Sabine Schleese, Managing director, Schleese Saddlery Service Inc.; Katherine Windfeather-Thompson, Animal Communicator and Healer, Author; and Molly Wells, President of Equinessence and an ATS, EBW Certified Equine & Canine Acuscope Therapist/Instructor. Other speakers will be announced soon and posted on WHIN’s website.

END_OF_DOCUMENT_TOKEN_TO_BE_REPLACED

The FEI President was addressing 600 delegates, including key members of the world’s equine industry, breeders and leading equine veterinarians, at the conference in the historic city of Hyderabad.

“The events organised around the world to mark World Veterinary Year have demonstrated the crucial role veterinarians play in improving animal health, pushing the boundaries of biomedical research and protecting the environment,” HRH Princess Haya said.

“The challenge is to better serve the wider equestrian community by leading and taking courageous and sometimes difficult decisions while ensuring that our horses, our industry, our sport, our food supplies and the future scientific breakthroughs needed by the world over are protected in all ways.”

END_OF_DOCUMENT_TOKEN_TO_BE_REPLACED

Lausanne (SUI), 31 October 2011 – The joint World Animal Health Organisation (OIE) and FEI conference focusing on modernising the conditions of movement of horses within South America has called for the removal of outdated or unjustified import and export barriers that are stifling the growth of equestrian sport.

The need for greater understanding of the health certification and quarantine requirements for horses competing at national and international levels was also highlighted at the conference, which was held last week in Guadalajara (MEX) during the Pan American Games and attended by 80 government ministers, international veterinarians and other specialists.

Speakers from the OIE, government representatives from South America and the FEI tackled the justification of some of the current restrictions imposed on healthy competition horses when travelling between South American countries, and the impact this is having on the development of equestrian sport across the region.

END_OF_DOCUMENT_TOKEN_TO_BE_REPLACED

The first annual WHINNY awards and the 3rd Annual Women in the Horse Industry Conference was a big success. The events were held October 6-8 in Nashville, Tennessee.

On Thursday night the red carpet was rolled out to identify and recognize people in the horse industry who are using their visibility to promote the welfare of the horse industry. Some of the WHINNY recipients who attended included Elizabeth Shatner (who not only received the award but picked up the one given to her husband Bill), country music superstar Lynn Anderson, Madeleine Pickens, Mike and Martha Borchetta, and Bonnie Garner. The event started off with live entertainment by some of country music’s most promising up and coming stars, including Keith Bryant, Dee Ann Dominy, Mark Wayne Glasmire, and Cassidy Lynn.

In addition to the live entertainment, there was both a silent and live auction benefiting several equine charities. Lynn Anderson served as the auctioneer and helped sell some wonderful items such as a signed guitar from the movie Country Strong by Gwyneth Paltrow and Tim McGraw and several paintings by Elizabeth Shatner. Some of the sponsors this year included Callaway Farms Manufacturing, National Equine Escrow, EasyMileLog, Equine Resources International, LLC, Tallgrass Animal Acupressure, and Energy Medicine, LLC.