The final phase at The Event at Rebecca Farm proved to be a test for many riders, but in the Adequan USEA Gold Cup CIC3* it did not change the overnight standings one bit. After the final horse crossed the finish line of Richard Jeffery’s show jumping course it was Kristi Nunnink who came out on top with her 11-year-old Holsteiner mare R-Star (Riverman x Marisol).

“It has just been kind of magical actually,” said Kristi. “She has been really good in all three phases – I couldn’t be happier. It’s been great and my little Prelim horse won also, so it has been an awesome weekend.”

“I felt really comfortable coming into today,” continued Kristi. “The jumps didn’t seem that big to me. I had seen some rough goes, but I wasn’t really too concerned as she really is a good show jumper.”

“The weather turned great – everything was wonderful, we had beautiful arenas, beautiful footing, it was a great event.”

END_OF_DOCUMENT_TOKEN_TO_BE_REPLACED

The singular goal that Phillip Dutton has been working for all season is now officially accomplished; he and Mystery Whisper are now qualified for this summer’s Olympic Games. And as a cherry on top of that accomplishment they also handily won this weekend’s CCI3* at Jersey Fresh in Allentown, New Jersey.

“It’s a big relief actually – not just to win but to get the horse qualified,” said Phillip. “I knew that he was more than good enough to win, but although that wasn’t the object it was icing on the cake. Every time we do something a bit more he steps up a little bit better. I guess the biggest thing I learned this weekend is that he can go for ten minutes very easily, and that is a great sign for the future because he will be even that much fitter if he gets to run London. There is not much the horse doesn’t have as far as being a three-day event horse.”

The 12-year-old Warmblood Gelding (Richmeed Medallion x Socialite) was purchased from Heath Ryan last year by the Wildasin family for their daughter Arden to ride. However, Arden generously agreed to allow Phillip to have the ride through this summer’s Olympic Games.

END_OF_DOCUMENT_TOKEN_TO_BE_REPLACED

There were no rails in hand heading into the show jumping phase at The Fork, but that didn’t matter to Phillip Dutton, Karen O’Connor, Michael Pollard, and Allison Springer as they all held onto their overnight leads in their respective divisions by jumping clear rounds over the Sally Ike designed show jump course.

In the Adequan USEA Gold Cup Advanced B Division, Allison Springer and Arthur, a 13-year-old Irish Sport Horse gelding (Brandenburg’s Windstar x Kelly), led from wire-to-wire to finish on their dressage score of 22.7 in the extremely competitive class.  The pair had quite a few hard rubs in the show jumping arena, but luck was on their side and all of the poles remained resolutely in their cups.

“Three years ago I started working with Katie Prudent,” explained Allison. “And she is the one who has really changed that horse and me. I think he was just written off as a very un-careful horse and would never be careful, and I didn’t want to believe that because he is such a good talent. [Katie] was so helpful with him.”

END_OF_DOCUMENT_TOKEN_TO_BE_REPLACED

Despite being halfway across the world from his native Great Britain, James Alliston has proven that he is quite at home in California with back to back wins at Galway Downs’ premier events. Last November James rode India McEvoy’s 14-year-old Irish Sport Horse (Jumbo x Lakeland Princess) Jumbo’s Jake to the win at the CCI3* and he repeated the feat once again with a wire to wire lead at this weekend Adequan USEA Gold Cup CIC3*. In addition to taking home the blue ribbon, James also claimed the red with his and Chuck and Peggy Moore’s Tivoli. The ten-year-old Dutch Warmblood gelding who was competing in his first CIC3* added only 7.6 time penalties to his dressage score to finish 10 points behind his stablemate.

“Jake was awesome in all three phases this weekend,” said James. “This was a perfect preparation for Rolex. The time was very tight and I think I had a bit of a gap in the scores so I could have gone a bit slower and still won, but I wanted to give him a bit of a fitness work before Rolex and he finished full of running. He was pretty strong going out there which is quite unlike him, so I think that bodes well for Rolex really.”

END_OF_DOCUMENT_TOKEN_TO_BE_REPLACED

Phillip Dutton entered the final round of the Adequan USEA Gold Cup CIC3* at the Red Hills Horse Trials with three rails in hand. However, the significant lead was wasted as Phillip and the Wildasin’s Mystery Whisper jumped clean around Fuzzy Mayo’s course and added only three time penalties to finish on the score of 35.7. Only seven of the twenty rounds (Rachel Jurgens and Ziggy withdrew before the morning’s horse inspection) in the CIC3* were completed without poles falling.

“I’m very excited about Mystery Whisper,” said Phillip. “It is a bit of a fairy tale to have the horse for a very short amount of time and all credit to Heath Ryan who actually bred the horse, broke the horse, and educated the horse. It’s been pretty easy so far to get to know him, and it’s fortunate that the Wildasins have allowed me to ride the horse for a while.”

END_OF_DOCUMENT_TOKEN_TO_BE_REPLACED

Buena Vista, VA (January 18, 2012) – Eventing riders endorsed by World Equestrian Brands, LLC, an equestrian company dedicated to providing equestrians with the finest products on the market, rode away with top honors from the United States Eventing Association (USEA) in 2011. From winning the coveted USEA Rider of the Year title to taking home the prestigious International Developing Rider Grant, World Equestrian Brands riders showed off their successful competitive year in style – not only winning multiple awards but also doing it in tack from World Equestrian Brands.

“These riders work really hard and are dedicated to the sport, and it is great to see them honored for their efforts. They have accomplished so much this year and we are grateful to be part of their winning team,” said Robin Moore, President of World Equestrian Brands. “It is awesome to see the trickledown effect of the riders’ talents, as their students also had milestone accomplishments throughout the year and took home some pretty impressive awards from the USEA.”

END_OF_DOCUMENT_TOKEN_TO_BE_REPLACED 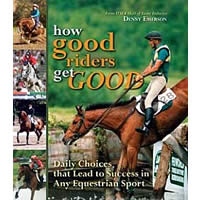 The Open Session
USEA Hall of Fame Inductee and author of “How Good Riders Get Good,” Denny Emerson is a wealth of knowledge and one of the most respected horseman (across all disciplines) in the equestrian sports community.  He will discuss the cross roads and critical decisions that riders must make in their careers in order to truly become “good.”  This session will be open to both horse professionals and their customers. We expect it to be quite inspirational.

Members Session – Live Q&A and Personal Tips on Equestrian Career Planning
Speaker: Denny Emerson
Date: October 17th
Time: Immediately following the open session
Format: Simulcast – attend via your phone or computer
Summary: This members only session will enable our members to engage in some “one on one” discussion with Denny about their own careers.

END_OF_DOCUMENT_TOKEN_TO_BE_REPLACED

Mere seconds played a huge role in the final outcome of this year’s Richland Park CIC3* (Richland, Michigan), one of the final legs of the $20,000 Adequan USEA Gold Cup Series.

Buck Davidson, riding Ballynoe Castle RM, and Jennie Brannigan, aboard Cambalda, had been neck-and-neck all weekend, jostling for a top position. The two riders began the event tied for second with 43.3, but after cross-country day, Davidson and ‘Reggie’ finished double-clear just a second under the optimum time over Ian Stark’s challenging course; Brannigan and ‘Ping’ also finished fault-free but were seven seconds under the optimum time. Both moved into a tie for the lead after overnight leader Phillip Dutton and Ben picked up a few time faults; they headed into show jumping Sunday morning knowing how incredibly close the standings were.

“Not Your Average Horse Show!”

Horseback riding tends to have a somewhat sissified reputation — perfectly coiffed men and women in top hats and tails perched prettily on top of overpriced hayburners.  That is so not the case with the Olympic sport of eventing, an equestrian triathlon that is a test of skill, strength, partnership, and just plain guts — definitely not your average horse show. These riders have grit, their horses have more heart than a Disney movie, and more than 500 of them from every corner of the country will descend on Bouckaert Farm at Chattahoochee Hills in Fairburn, September 8-11, for the Nutrena USEA American Eventing Championships (AEC), presented by Bit of Britain, which is slated to rank as one of the biggest competition in the sport’s nearly 100-year U.S. history.

Eventing has its roots in the cavalry, so we’re talking white knuckle, take-your-breath-away feats of athleticism on the part of both horses and riders, who participate in three different phases over several days.  Unlike almost all other sports, men and women compete on equal terms, in the same divisions. The horse is the equalizing factor, and these horses are unlike any you will see in competition. At the top levels during the sport’s signature phase of cross-country, expect to see them leap off banks almost as high as a refrigerator, jump some fences practically as narrow as a doorway, and bound across ditches as wide as your average car.  If you were to compare them to other athletes, think extreme – snow boarders or BMX riders. Think Olympic Games meets X Games.

At the Nutrena AEC, top horses and riders at every level, from juniors and adult amateurs to Olympic veterans, will battle for more than $70,000 in prize money and nearly $100,000 in prizes — not to mention bragging rights, with close to a dozen past Olympic, World and Pan American medalists on hand.

END_OF_DOCUMENT_TOKEN_TO_BE_REPLACED

Kalispell, MO – After a rollercoaster day of extreme highs and lows, the 10th anniversary of the Event at Rebecca Farm in beautiful Kalispell, Montana wrapped up today with a nail-biting climax in the CIC3*, part of the Adequan USEA Gold Cup Series.

Though Allison Springer and her longtime partner Arthur had a ten-point lead heading into today’s show jumping, victory wasn’t yet in their grasp, and because the Irish gelding is notoriously spooky, Springer knew she had her work cut out for her. A life-size horse statue in the middle of the ring would prove to be their nemesis, and Arthur took a serious dislike to the sculpture, though Springer fought to keep his mind on the task ahead. As the rails clattered down, the pair dropped further and further down in the standings — a heartbreaking end to such a promising weekend. Seven rails and a time fault left them with a disappointing 11th place finish.

Even though some horses were a bit on edge because of the course decorations and ringside crowds, many riders had fantastic trips over Richard Jeffery’s challenging course, and when the dust settled at the end of the day, it was long-time Rebecca Farm supporter Hawley Bennett-Awad and Linda Paine’s Gin N’ Juice who led the victory gallop. After picking up just a single rail in the triple combination, ‘Ginny’ reveled in the electric energy from the crowds and jumped her heart out, much to Bennett-Awad’s delight.

“It was awesome,” said Bennett-Awad. “She actually wanted to get a little excited as she passed that horse statue in the ring, but she kept her cool and I was really proud of her.”