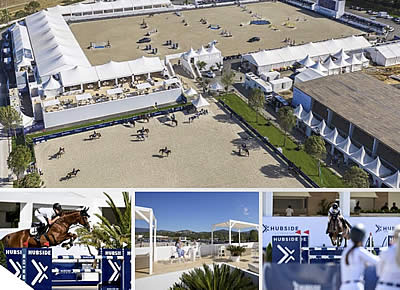 HUBSIDE JUMPING’s season is coming to a close with this second-last week of competition. But the elite of international show jumping has settled in the Gulf of Saint-Tropez this week once again, with almost seventy-five percent of the World Top 30 present in Grimaud for the CSI 4*.  In the CSI 2*, the spectators will be the first to attend the farewell of one of their favourite riders.

Open to everyone, free of charge. It is mandatory to wear a face mask.

The Gulf de Saint-Tropez and the HUBSIDE JUMPING de Grimaud have become the headquarters of world show jumping for good in just one summer. The French Riviera show will play host to all the best European riders once again for its tenth week of competition. 22 riders featured in the Top 30 are expected this weekend, among which the whole of the current Top 5 (Switzerland’s Steve Guerdat and Martin Fuchs, Germany’s Daniel Deusser, Sweden’s Peder Fredricson, and Belgium’s Pieter Devos). The French Olympic team gold medallists Pénélope Leprévost and Kevin Staut will also be competing, as well as the current World individual gold medallist, Germany’s Simone Blum.  The winners of the previous 4 and 5* Grands Prix will try to have a second win, like Steve Guerdat, Great Britain’s Scott Brash, Brazil’s Marlon Modolo Zanotelli, France’s Nicolas Delmotte, Ireland’s Denis Lynch, or even a third one, like the Netherlands’ Maikel van der Vleuten and Belgium’s Niels Bruynseels.

All of the classes will be broadcast live on https://grandprix.tv/fr.