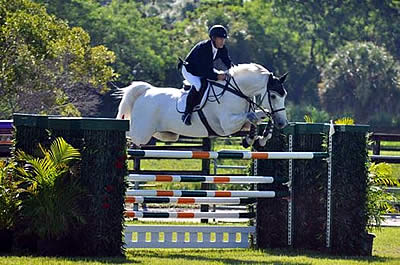 Venice, FL – July 15, 2014 – As the summer show season is hitting its peak, so is the team at Castlewood Farm. On the road again, Castlewood Farm just finished their first week at Fox Lea Farm in Venice, FL, where they brought home top ribbons all around. Everyone from the beginner riders at the farm to the trainers had a good week, marking a strong start to the three-week show series.

“(Conquistador II) was doing the Children’s Jumpers in the beginning of the week with Marissa [Tomasetti], and we saw that the Grand Prix didn’t have a million people in it so we decided to take a shot,” said Korotkin. “It was a last minute decision, but it was awesome. He was great. He goes like an equitation horse around the jumps and is a pleasure to ride.”

The 18-hand gelding made his way around the Grand Prix course as if the fences were two feet high. Following his two clean courses last week, Korotkin plans to enter Conquistador II in the Grand Prix this upcoming week as well.

The Castlewood Farm owner was not the only Korotkin reeling in the blue ribbons this past week. His son Tanner won his fair share of first place ribbons with Rocketman in the Children’s Adult Jumper classes, as well as a second place in the NAL Jumper Classic.

The 20-year-old grey Warmblood was Alan’s grand prix horse before Tanner took over the reins. The new relationship formed right before the start of the 2014 Winter Equestrian Festival, and it seems to be the perfect match.

“Last year, Rocketman was third in the grand prix here. He’s getting a little older, so I thought it was time for him to teach Tanner how to really ride. He’s such a good horse, and for our family he’s been a once in a lifetime horse,” explained Korotkin.

Another big win of the week saw Samantha Shinn and Quintos Z claim the blue ribbon in the $2,500 USHJA National Hunter Derby. With a score of 84 in their first round, the two continued to amaze the judges over their second course, securing a score of 90.

“I didn’t expect anything, just to have fun. It was fun course, yet difficult at same time, with good competition,” said Shinn. “My horse was really good, and he always gives his best. We are definitely doing the derby again this week.”

Shinn had some close competition in the USHJA National Hunter Derby, some of the riders being her own barn mates. Madison Butehorn and Icarus made a run for the blue ribbon, with a second round score of 88, falling just behind Shinn. Marissa Tomasetti and Gerico also vied for the top, placing fifth in the derby.

The rest of the Castlewood team was equally impressive during the Fox Lea Farm Camp Dress Rehearsal. In addition to Alan, Samantha Senft and her mount Early Morning also competed in the $25,000 Grand Prix. With a successful start to the summer, Senft and “Early” continue to reel in the ribbons, finishing in 11th place in the grand prix. Senft also guided Amorkus to top ribbons.

The riders will continue to show at Fox Lea for the remainder of July. At the end of the show circuit, the farm returns to Wellington, FL where they begin to host their own show series at the Jim Brandon Equestrian Center. Aug. 1-3 will be an A-rated show, featuring a $10,000 class. Four C-rated shows will take place from Aug. 12-15, hosted in conjunction with James LaLa.

Castlewood Farm, Inc. is a full service riding, training and sales facility located on ten acres in the heart of Wellington, FL. Alan Korotkin and his team, including exceptional trainers Susan Tuccinardi, Samantha Senft and Katie Brown, cater to the serious equestrian, offering instruction for the beginner, the medal finals veteran, the grand prix specialist and everything in between.

Castlewood Farm, Inc. presents a vast selection of horses for sale or lease, suitable for all divisions and in every price range. The farm also offers leasing packages, including a WEF lease specifically catered to the winter circuit competitor.