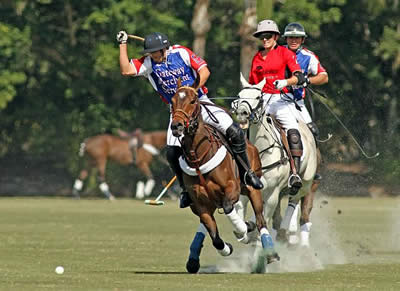 Wellington, FL – February 9, 2015 – The second game of the Ylvisaker Cup between Casablanca and Gateway Merchants was postponed and then resumed nine days later after Luis Escobar suffered a fall in the fifth chukker that necessitated transport to Delray Medical Center. Escobar is making significant improvements and is expected to make a full recovery. Casablanca weathered the pressure, the interruption and a cloudburst by staying focused and won 12-10.

Throughout all the excitement and uncertainty in scheduling and players, the Casablanca team stayed resolute in their game plan.

“We stayed focused on our game plan,” said veteran player Juan Bollini. “It did not matter who was on the other side; it could have been Facundo Pieres or Adolfo Cambiaso; we talked about keeping our cool and playing as a team.”

That paid off as Casablanca hung on to a one goal lead at the time of postponement to win the game and garner a 2-0 record in bracket play.

The first chukker kicked off with a handicap goal on the board for Casablanca, the team in red rated at 18 goals compared to the 19-goal Gateway Merchants team. Luis Escobar of Gateway Merchants quickly equalized the handicap goal with a penalty 3 shot that was deemed “crafty like a fox” by announcer Toby Wayman for the stealthy walk approach. After that, the momentum swung in favor of Casablanca for the first half. Mark Tomlinson was everywhere creating plays, especially in the second chukker when he was mounted on an agile chestnut mare, named Analizada. Guille Aguero hustled the hitter on set plays and knock-ins and young Grant Ganzi played with maturity beyond his years as his offensive plays stretched the field nicely for Casablanca on offense.

Gateway Merchants finally got a goal from the field to start the third chukker on an Escobar back shot to Pelon Escapite. That got things moving for the Merchants as they scored twice more to close the gap to within one goal at the end of the third chukker. Casablanca rode back to the tent at halftime holding on to a 6 to 5 lead.

The teams traded goals after the half time break. Tomlinson brought back the handy chestnut and produced a lot of quick plays and a run to goal in the fourth chukker to make the score 9-7 after the fourth chukker in favor of Casablanca. But, the almost perfect performance by Escobar at the penalty line (converting six out of seven penalty shots) kept Gateway Merchants breathing down the neck of Casablanca and brought them back to within one goal in the middle of the fifth chukker. Escobar and another player collided and the game was halted.

The game was postponed with 3:40 remaining in the fifth chukker with the Casablanca team leading 9-8. When the game resumed nine days later, the Gateway Merchants roster was different as Matias Magrini had replaced Escobar, Nico Escobar replaced Scott Swerdlin (out for an injured arm) and Mariano Gracida replaced Pelon Escapite to keep the team at the same handicap.

Casablanca was awarded a penalty two call and converted the penalty and added a field goal from Guille Aguero as black clouds rolled in and rain drops started to fall. Magrini converted a penalty two for Gateway Merchants to bring them back within two goals at the end of the fifth chukker.

Rain continued to fall as the players came onto the field for the sixth chukker, the players seemed determined to play on. Magrini put another point on the board for Gateway Merchants to bring them within one goal, getting some help from Nico Escobar stealing the ball at mid field to start the drive. But Gateway Merchants never let up, and kept the defensive pressure on to force a turnover that led to a Juan Bollini field goal on the south end that sealed the victory and undefeated record for Casablanca.

Mark Tomlinson commented, “It was a difficult game, but we were properly committed. The pressure was definitely on coming into the last part of this game after all that time, having won a game in between and having a chance now to advance to the quarters.”

Casablanca was not even going to play in the tournament until the sudden withdrawal of another team led to the formation of the Casablanca team just four days before the start of the tournament.

When asked if he ever thought it would work out to be one of the only undefeated teams in his bracket, Bollini responded, “I knew we had good players, but we just planned to stay focused on making it nice for Grant, who is like a son to me. We planned to play for experience for him and play well and see what happens.”

What happened is an undefeated record for Casablanca heading into the final round of bracket play and enviable position as teams jockey for quarterfinal berths. The third round of bracket play for the Ylvisaker Cup will be very interesting, that starts on Tuesday February 10 with Villa del Lago versus Tonkawa at noon.