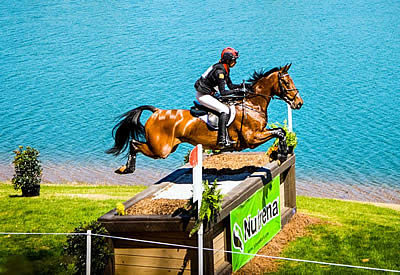 Caroline Martin and The Apprentice. Photo By: Shannon Brinkman.

Gladstone, N.J. – July 20, 2017 – The United States Equestrian Team (USET) Foundation is pleased to announce that this year’s recipients of the Jacqueline B. Mars Competition and Training Grants are Caroline Martin and Doug Payne. Martin and Payne were recognized and unanimously selected by the US Equestrian eventing selectors due to their impressive records and future in representing the United States in international competition.

As recipients of the Jacqueline B. Mars Competition and Training Grants, Payne (Aiken, South Carolina) will travel to compete in the Blenheim CCI3* in Oxford, England with his and Debi Crowley’s gelding, Vandiver. Martin (Riegelsville, Pennsylvania) will travel to The Netherlands for the Military Boekelo-Enschede CCIO3* in October to compete her two geldings, Pebbly Maximus and The Apprentice.

Payne’s show jumping and dressage has continued to improve throughout his career in addition to maintaining his success in cross-country. Payne took over the ride for Vandiver in 2015 and in 2016, the pair placed fourth in The Fork CIC3* in April and earned a third place finish in the Nutrena USEA American Eventing Championships in August.

“It’s a huge honor and certainly an obligation to do our best and make the most of the opportunity,” noted Payne. “It’s a great opportunity against the best in Europe. The timing works really well and sets us up for 2018, which is the ultimate goal. I have to thank Jacqueline Mars and the USET Foundation for having faith in me and awarding grants like this. The experience gained is very difficult to get by yourself.”

Payne and Vandiver continued to find success in 2017, earning a second place at Pine Top Advanced CIC3* in February and a second place finish in April at The Fork CIC3*. Payne also plans to compete in the Millbrook Horse Trials and the American Eventing Championships before traveling to England.

Martin has been a part of the Emerging Athlete’s program since 2013, and recently received the 2017 Karen Stives Eventing Endowment Fund Grant. Martin had the opportunity to participate in the Karen E. Stives European Emerging Athlete Tour under the tutelage of Leslie Law, furthering her education and gaining competitive experience in Great Britain. Martin finished her two horses, Pebbly Maximus and The Apprentice, in fifth and eighth place, respectively, at the Bramham International CCI3*-U25 in June.

“It’s unreal to receive this grant,” expressed Martin. “It’s the second grant I’ve received this year and it’s a dream come true to have this much support from my country. I’ve always wanted to be a professional rider. I’ve now switched over from the Under 25 group to the young professional and it’s wonderful to go overseas and represent my country. I have two remarkable horses with The Apprentice and Pebbly Maximus and I hope to improve upon my results from earlier this year.”

Martin had the first 3* win of her career this year at Carolina International’s CIC3* in March. At just 22 years old, Martin is one of the country’s up-and-coming stars, and her return to Europe with her two geldings will be a strong stepping stone in her aim towards competing at the Kentucky CCI4* in spring 2018.