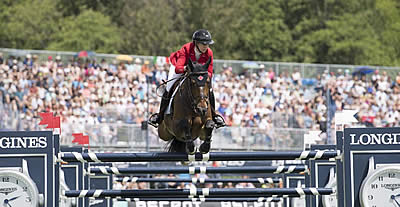 There was plenty to celebrate when the hosts posted an emphatic victory in the Longines FEI Jumping Nations Cup™ of Canada at Thunderbird Show Park in Langley (CAN), where Ireland finished second and USA slotted into third ahead of Mexico in fourth and Israel in fifth place.

However, despite his side’s overwhelming success, Canadian Chef d’Equipe Mark Laskin said, “It was a bit bittersweet. It’s great to win here, especially on our home field, but there were two parts to this equation. The first part we took care of, but the second part we just missed.”

He was of course referring to the fact that Canada has finished third, and last, in the 2019 North/Central America & Caribbean League from which only two of the three competing nations can qualify for the Longines FEI Jumping Nations Cup™ Final in Barcelona (ESP) in September. Those two places go to Mexico, winners of the previous two legs of the series, and to USA who have pipped the Canadians for the second spot by a narrow margin of just 10 points.

There is no denying the new energy and excitement in the Canadian side, however. With three first-round clears they grabbed the advantage, and they held on so firmly that anchorman, Mario Deslauriers, didn’t have to ride again in the second round because the win was already in the bag.

Ireland, USA, and Mexico were all sharing second place with eight faults apiece going into round two, and when the Irish added nothing more they would be runners-up while USA had to count four more faults to finish third on 12. Mexico finished another fence further adrift, on 16 faults despite a superb double-clear from Salvador Onate and his fabulous gelding Big Red who produced one of five foot-perfect performances on the day.

When both pathfinder Lisa Carlsen and her busy bay mare Parette and second-line rider Nicole Walker with the super-cool Falco van Spieveld each put a second clear round on the board, the Canadians were already looking like runaway winners. And although Tiffany Foster picked up her second four faults of the afternoon with her promising nine-year-old Figor when next to go, that was still good enough to clinch it.

When asked afterwards if she knew when she was riding into the arena that a clear or four fault result would seal the win, Foster said with a laugh, “I’m not great at math but I figured that one out! When I was coming down the last line, I had Mario in mind – I was thinking, he’s going to kill me if I have another one down and he has to jump, so we held it together!”

Walker said she was “super-delighted for everyone” on her team and with the “spectacular” performance of her horse. She wasn’t wrong about the latter as Falco van Spieveld made it all look like a training exercise. “He’s the best partner I could possibly ask for – in the barn he’s super easy and he’s a bit lazy at home, but when he goes in the ring he’s so reliable,” said the 25-year-old who works in the family business with the Stronach Group, and who trains with Irish rider Cian O’Connor on a regular basis.

Reflecting on where the result leaves Team Canada, she concluded, “We would have liked to make it to the Final in Barcelona, but the cards didn’t fall in order for us today; that’s the way it goes. Now our big plan is the Pan Ams where we will be looking for Olympic qualification.”