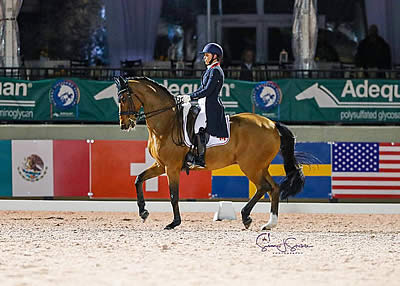 Jill Irving (CAN) and Degas.

The 15-strong class was won by last-to-go Jill Irving on her own Degas 12 and was the qualifier for the Grand Prix Freestyle CDI-W, which takes place under the lights on Friday evening.

“I was really thrilled with him,” enthused Irving, who is based between New Brunswick in Canada and Wellington, Florida. “He’s going to be 18 this year and I’m going to be 57, so we’re both having to take good care of ourselves for the future. I’ve had him since he was six and this cooler weather was really his cup of tea.”

The De Niro son’s test was well balanced and unhurried, with just a single mistake in the two-time changes. Irving and her teammates have their sights firmly set on the Tokyo Olympics this summer, and this marked a good start in her and Degas 12’s campaign. This win comes off the back of Canada’s team gold at the Pan American Games in Lima, Peru in July of 2019 and this was the duo’s first competitive outing since then.

“It’s my childhood dream to go to the Olympics — for every athlete they’re the dream. I feel really prepared for this journey, but Canada needs to take the best horse/rider combinations and I hope that’s me, but if it’s not, we take the best,” said Irving, who has a second horse, Arthur, at international grand prix level.

She also praised the AGDF for elevating the status of competitive dressage in the US: “The AGDF is amazing and I’ve been coming here since 1992; it’s less stressful than a European tour where you’re always moving to different venues, with paperwork and travel,” she explained. “But here, the Friday night under the lights shows prepared me for Aachen. I thought, it’s just like Global, but bigger.

“Dressage horses need this show in North America. The footing is great and we’re a family here; I can come and invite people to watch and it’s a world class facility. It gives us the opportunity to compete against people like Steffen Peters and Laura Graves — all the big guns — without having to go to Europe. I wouldn’t be where I am today if it weren’t for Global. It’s put dressage on the map for the United States. When I’m an old lady and I can’t ride a horse, maybe I can own one and still come.”

The top three finishers in the class — Irving, Brittany Fraser-Beaulieu, and the up-and-coming 23-year-old Naima Moreira Laliberte — all train with Ashley Holzer, with whom Jill is based at Wellington.

For Fraser-Beaulieu, this was her second show back with her long-time partner All In since having a baby in the summer of 2019. She and the large-framed 15-year-old chestnut gelding by Tango scored a little under 70%, with Moreira Laliberte and the elegant Sandro Hit son Statesman less than 1% adrift.

There were 19 starters in the day’s other grand prix class, the CDI3* Grand Prix presented by MTICA Farm, which is a qualifier for Saturday afternoon’s CDI3* Grand Prix Special. The California-based 55-year-old Steffen Peters, the penultimate rider, overtook the long-time leader, Great Britain’s Susan Pape, to claim the class with 70.826%.

Under Peters, Akiko Yamazaki’s 12-year-old gelding by Spielberg out of a Krack C dam showed brilliance peppered with patches of over-exuberance, resulting in a wide range of marks from the five-strong panel of judges. This was Peters and Suppenkasper’s first show since competing at Aachen in Germany in July of 2019.

Susan Pape finished second with 70.435% on Harmony’s Eclectisch, an 11-year-old black stallion by Zenon, who was stepping up to grand prix internationally for the first time. Germany’s Michael Klimke was third on another Harmony Sporthorses-owned ride, scoring 70.109% with Harmony’s Royal Dancer, a 14-year-old by Royal Blend.

“I was extremely proud of how Dolton handled the windy weather today,” said Trunnell of the eight-year-old gelding who posted a personal best score in this class. “He has been really eager to go these past few days so it’s been nice not having to remind him to keep marching, but at the same time I’m having to sit relaxed enough so as not to make him look like he’s rushing. It’s a really fine line.

“Dolton has taken it upon himself to make sure I’m safe on his back, so I think the windy weather really made him tune in and listen to what I was asking,” added Trunnell, who is competing in Wellington for her fifth consecutive year.

In the Grade II class, Mexico’s Erika Baitenmann Haakh and Leonora performed an incredibly consistent test to win the six-strong class with 70.101% — the only plus 70% of the classification.