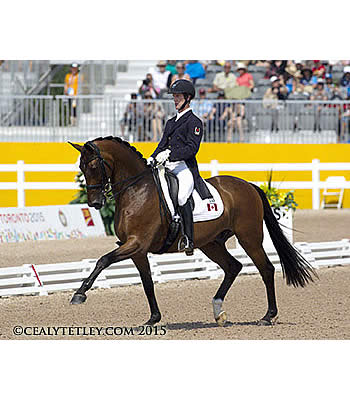 Caledon, Ontario – The Canadian Dressage Team comprised of Brittany Fraser of New Glasgow, NS, Megan Lane of Collingwood, ON, Belinda Trussell of Stouffville, ON, and Chris von Martels of Ridgetown, ON is currently sitting in second position following the first of two days of team competition at the TORONTO 2015 Pan American Games. Dressage competition is taking place July 11, 12, and 14 at the OLG Caledon Pan Am Equestrian Park in Caledon, ON.

The USA currently sits in first place with a score of 230.504 points, followed closely by Canada in second position with 226.071 points. With 206.703 points, Mexico has edged ahead of Brazil, who scored 206.500 for fourth position. A total of ten countries are competing, with the best three scores from each team counting towards the team total.

In his major games debut, von Martels, 32, was the first rider into the arena for Canada. Riding Zilverstar, an 11-year-old bay Dutch Warmblood gelding sired by Rosseau, von Martels displayed a clean and expressive test to earn a score of 75.026% from the five-member judging panel.

“I’m ecstatic,” said von Martels following his performance. “I’m really, really happy. It could not have been better, especially for the first day of competition. We had our goal and our strategy to go in and ride a really clean test, and that’s exactly what we did.”

Of his mount, von Martels said, “His overall focus was fantastic. It’s a big atmosphere in there, very energetic and very uplifting. He is a real show horse, and he rises to the occasion. He was certainly in that form today. The crowd is extremely supportive, and that is, without a doubt, a big help.”

Fraser, 26, was next in for Canada riding All In, a ten-year-old liver chestnut Dutch Warmblood gelding (Tango x Damiro) owned by the athlete and Marc-Andre Beaulieu. Fraser held nothing back, producing a powerful test highlighted by incredible trot work, to put her name at the top of the leaderboard with a score of 76.105%. By day’s end, the Nova Scotia native was in second place in the individual rankings.

“My horse was amazing!” said Fraser, who, like von Martels, is also making her major games debut. In praise of All In, Fraser continued, “He’s never experienced a crowd or atmosphere like that. He’s ten years old. He doesn’t have that much experience in an atmosphere like this. He’s the horse of a lifetime.”

While von Martels and Fraser rode the Prix St. Georges test, Lane and Trussell both contested the Grand Prix, which meant that a ‘bonus’ of 1.5 points was added to the team total for each athlete. Only teams comprised of Grand Prix competitors are eligible for 2016 Rio Olympic qualification, putting Argentina, Canada, Mexico and the USA in the running for the one and only Olympic qualifying spot available at the Pan American Games. As the host nation, Brazil is pre-qualified.

In the Grand Prix, Lane, 24, rode Caravella, a 14-year-old bay Dutch Warmblood mare (Contango x Riverman) owned by the athlete and her mother, Cathy Lane. The pair produced a precise test to earn a score of 70.900%.

“I was really happy with my performance and with my horse,” said Lane of the mount she also rode at last year’s Alltech FEI World Equestrian Games in Normandy, France. “It is unbelievable to have my own horse, my junior horse, come all this way. We’ve essentially grown up together. I’m at a loss for words!”

“If I didn’t know I was in Palgrave, I wouldn’t believe it,” said Lane. “The work that they have put in here is mind-blowing! It’s really fantastic, a great venue to ride at, and the horses seem really happy here. That makes for a beautiful Pan Am experience. I’m thrilled to be here.”

When Trussell’s score was posted, it became apparent that the race for team gold is far from over.

“We came here to leave a mark and we did that,” said Trussell, who is competing in her first Pan American Games. “We came for gold and we’re still going to strive for it. Tomorrow is another day out there. I know it’s going to be hard, but one of our goals today was to achieve personal bests and a lot of us did that. I am so proud of my team!”

Team competition continues on Sunday, July 12, with both team medals and the all-important Olympic qualification hanging in the balance. Fraser and von Martels will perform the Intermediaire I test, while Lane and Trussell will contest the Grand Prix Special.

On Tuesday, July 14, individual medals will be decided by the popular freestyle to music competition. Currently, Steffen Peters of the United States leads the way with a score of 77.240% earned riding Legolas 92 with Canada’s own Fraser hot on his heels with 76.105%. American Kimberly Herslow sits third with a score of 75.184% riding Rosmarin.

Laura Graves of the United States is fourth with Verdades on 75.080% while von Martels is currently ranked fifth, followed by Trussell in sixth. Lane currently holds the eighth position, putting all four Canadian Dressage Team members in the top eight individually.