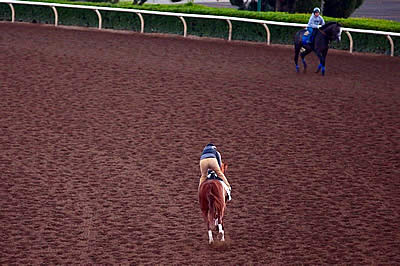 The Bob Baffert-trained Arrogate is one of the stars of thoroughbred racing and is aiming to clinch successive Breeders Cup Classics when he takes to the track at Del Mar on November 4. The lucrative race is set to be Arrogate’s final outing before heading to stud at Juddmonte Farms in Kentucky. The multiple Grade 1 winner faces stiff competition from Steve Asmussen’s Gun Runner, who will be aiming to crash the party and steal the headlines.

Arrogate’s trainer enthused about his chances in the race and was left beaming following a successful workout at Santa Anita. “That went perfect,” he declared after watching his charge travel the six furlongs in 1:13.20, whilst rider Rafael Bejarano boldly declared, “He’s ready now.”

After clinching a track record during his first ever Stakes race appearance, Arrogate was always destined for the top and the Baffert-trained horse will be hoping to end on a high after a mixed 12 months. Success in the Dubai World Cup in Meydan was followed by two underwhelming performances (by his high standards) which both came here at Del Mar. Some are blaming the track for the fourth place in the Grade 2 San Diego Handicap but the four-year-old must prove his credentials and ability to bounce back at this particular venue on November 4th.

Arrogate’s last competitive action came here at the end of August when finishing behind Collected in the Pacific Classic Stakes, going down by half a length.

Whilst all eyes will be on Arrogate, the Baffert stable comes into this race extremely strong-handed as they aim to land the $6million prize-pot on offer to winning connections. They are likely to pitch Collected, West Coast and Mubtaahij into the contest and all three thoroughbreds are likely to be in the top six of the betting. The latter is an Irish-bred five-year-old who will be aiming to make it back-to-back successes in Grade 1 company after taking the Awesome Again Stakes at Santa Anita at the beginning of October.

Gun Runner is the current favourite for the one and a quarter mile contest and is fancied by many punters to steal Arrogate’s thunder. He has also been working out at Santa Anita ahead of the Grade One contest completing five furlongs in 1:00.40 and reportedly looking “fantastic” according to XBTV reporter Camilla Yakteen. She later added that the horse has a “huge reach”.

Trainer Steve Asmussen was equally impressed by his charge, claiming, “Gun Runner looked great galloping out throughout the wire; he cooled out nicely.” He comes off the back of successive Grade One victories, including making all in the Whitney and Woodward Stakes at Saratoga. The stable will be desperate to avenge the narrow defeat to Arrogate in the aforementioned Dubai World Cup back in March.

Another fascinating rematch arrives in the Breeders’ Cup Turf Sprint, where the Wesley Ward-trained Lady Aurelia comes up against Marsha once again, with just a nose separating the pair in the Nunthorpe at York racecourse earlier in 2017. It will be a debut Breeders’ Cup for both trainer Sir Mark Prescott and jockey Luke Morris and they’ll be hoping to make a winning start at the annual meeting.

No European representative has ever been successful in the Turf Sprint and the pair will be aiming to set records tumbling this year. Another British hope likely to be partaking in the Breeders Cup is Ribchester, although the Richard Fahey trained four year old also has an entry for the Queen Elizabeth II Stakes at Ascot’s Champions Day, a race in which the horse will be the 15/8 second favourite according to racing analytics site Timeform.

Arrogate is undoubtedly the star of the show once again and the Baffert stable appears to be pleased with his progress ahead of the showdown with Gun Runner. Despite a poor couple of runs here at the track, the four-year-old does have a victory to its name here at Del Mar but that success came back August 2016 when starting 1/10 favourite in an Allowance Optional Claimer, finishing narrowly ahead of Kristo. The Asmussen horse is the narrow favourite but Arrogate will be determined to add one final triumph to his already glittering racetrack record.