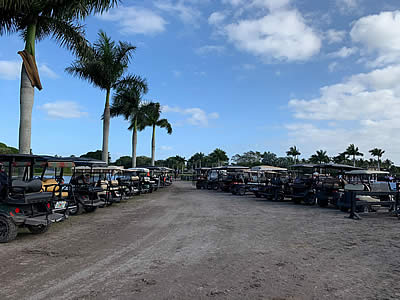 Q: We are planning to rent a golf cart during an upcoming horse show in Florida. What are some things we need to keep in mind? Can my 14-year-old daughter drive the cart, even though she doesn’t have a driver’s license yet?

Answer: The first thing to know is that each state has its own rules regarding the age requirements for driving a golf cart. As a result, what may be considered an acceptable age in one place could be illegal in another. This is why it is important to always check the rules and regulations if you are considering letting a minor drive a golf cart.

In most states (including Florida), a child has to be at least 14 years of age to be able to drive a golf cart. In other places such as Texas, the driver has to be around 16 years old. Then there are states such as California and South Carolina that allow children to drive golf carts at the age of 13.

It’s also important to know what Florida defines as a golf cart versus an LSV (low-speed vehicle). According to its statute, Florida defines an LSV as a four-wheeled electric vehicle whose top speed is greater than 20 mph, but less than 25 mph. The minute that golf cart exceeds speeds of 20 mph, it becomes an LSV and is subject to a different set of rules. In Florida, low-speed vehicles are considered motor vehicles and are required to be titled, registered, and insured with Personal Injury Protection and Property Damage Liability coverage in order to be operated on Florida streets and highways, while golf carts in Florida are not required to be insured (although insurance, even on golf carts, is highly recommended).

Also, any person operating an LSV must have a valid driver’s license in their immediate possession. Be aware that your daughter may be able to drive the golf cart, but not an LSV — make sure you know which one you’re renting!

So, even though a golf cart driver is not required by Florida law to be a licensed driver, it is nonetheless a good idea. In addition to being of age, drivers are also required to know the rules of the road and how to safely operate such a vehicle.

Now that you know your 14-year-old daughter can legally operate a golf cart in Florida, but not an LSV, you should also be aware of liability concerns and consider if it is worth the risk if she damages property or injures someone.

Click here to read more about this topic as well as safety tips when driving a golf cart.