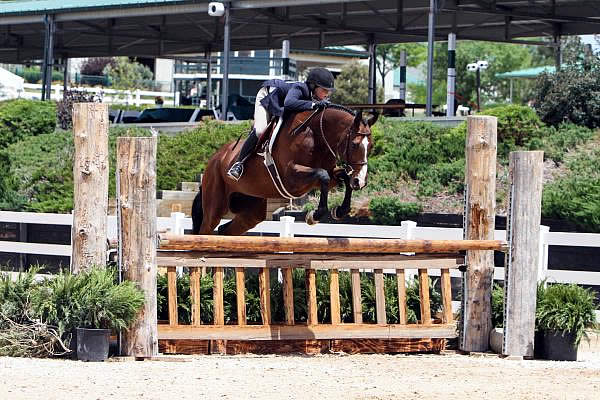 Parker, CO – July 19, 2013 – Emma Willsky and Simply Said scored a hat trick in the Large Junior Hunters and Caitlin Boyle and Finders Keepers collected two wins in the Small Junior Hunters as the Junior Hunter divisions got underway at Summer in the Rockies VI.

Boyle and Finders Keepers demonstrated how far their partnership has come, cruising through relaxed, confident rounds that showcased the horse’s flashy jumping style. Boyle has had Finders Keepers for about a year and a half and has enjoyed seeing him develop into the horse he is today.

“We’ve made many, many improvements with him,” she said. “When we got him, he’d probably never jumped over 3′. So it’s nice to see how much he can do. He’s actually really athletic. We improved his smoothness, jumping form, lead changes and strength. He’s so simple now. It’s really nice.”

Boyle and Finders Keepers were 10th in the $15,000 USHJA International Hunter Derby on Sunday at Summer in the Rockies V. “I’m so proud because that was his first derby, and he just walked in there and jumped right around, like he didn’t care about anything,” she said. “He was amazing.”

Boyle also rode her equitation mount, Loredo, to a first place finish in the Washington Hunter and Jumper Phases, securing the overall win with scores in the upper 80s throughout. She and Loredo are shooting for top finishes at the big equitation finals this fall, and they have placed well in the equitation throughout their three weeks at Summer in the Rockies.

“He was really good,” Boyle said after her win on Loredo, whom she leases from Micaela Kennedy. “He was nice and quiet. He has a giant stride and the lines walked nice and easy today. I just needed to stay on one rhythm and have everything look the same.”

“We were 17th at Harrisburg (in the Pessoa/US Hunter Seat Equitation Medal Finals) last year,” she added. “Now I know him a little better and hopefully we can do better this year. He’s just an awesome horse – you can do anything with him.”

Willsky and Simply Said had excellent rounds over fences and in the handy to score the wins in both classes in the Large Junior Hunters, and they stood out in the hack as well, earning another blue ribbon to complete the hat trick. Willsky said the horse shines in the hunter rounds, but came through in the handy as well to best the competition.

“He’s definitely my favorite horse to ride,” Willsky said. “He’s the only reason I still do the hunters – I’ve mostly switched over to the jumpers, but he always keeps it exciting. He’s very scopey.”

Willsky trains with Ashley Keeler, who has also achieved success with Simply Said at Summer in the Rockies. Keeler and Simply Said started off the week by winning the reserve championship in the 3’6″ Performance Working Hunters. Willsky began riding with Keeler after Keiri Kaneps, her previous trainer and the previous rider of Simply Said, passed away.

“I really like her as a trainer,” Willsky said of Keeler. “She’s done a really good job with him. He’s definitely learned a lot since he’s been with her.”

Willsky is headed to Vanderbilt University in the fall, where she plans to study economics. She will bring her jumper to school with her and hopes to bring Simply Said as well.

She recently rode Simply Said in the $15,000 USHJA International Hunter Derby at Summer in the Rockies V. “I’m aging out (of the juniors) this year, and I want to turn him into a derby horse,” she explained. “He’ll do 4′ easily. It’s what we’re working towards.”

Kai DeVoglaer and Colleen McKenzie’s Castello also performed well in the Large Junior Hunters, collecting two second places over fences as well as a third in the hack.

Camila Trejo, like Boyle, has her sights set on the big equitation finals, and she took another step toward that goal with a win in the ASPCA Maclay aboard Don Stewart’s Scarto. “I’m very happy with my ride,” Trejo said. “He was responding to my leg well and he’s jumping really well right now.”

Trejo, who lives in Dallas, TX, and trains with Jim and Joan Hensen, is competing at the Colorado Horse Park for the first time. “It’s a really nice horse park,” she said. “The footing’s great and so far the show’s been really good.”

The Junior Hunter divisions return Saturday in the Olson Family Hunter Arena. The 3’6″ and 3’3″ Amateur Owner Hunters will also square off as Summer in the Rockies enters its final weekend.