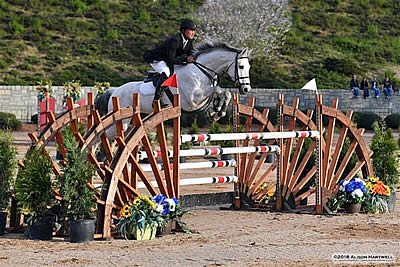 Jason Berry of Verona, Virginia was on fire Week I of the Atlanta Spring Classics. He ended the week with a win in the $15,000 Grand Prix, presented by EMO.

Thirteen horse and rider teams tackled the course designed by Allen Rheinheimer of Zionsville, Indiana in the Olympic Arena at the Georgia International Horse Park.

The first round was set with a time allowed of 81 seconds and 43 seconds for the second round. Seven advanced to a second round opportunity.

Chasen Boggio of Canton, Georgia and his own Co Pilot were the first horse and rider team to turn in double clear rounds in times of 71.642 seconds and 32.241 seconds, setting the new time to beat.

Heather Hook of Wellington, Florida and Meredith Darst’s Quester de Virton followed with the next set of double clear rounds, but their time of 33.934 wouldn’t beat Boggio and Co Pilot.

Berry and Andrew Kocher’s Duvelke followed with the next set of double clears and their time of 30.362 seconds would temporarily take the lead. Duvelke and Berry have been partners for only a couple of weeks according to Berry.

Aida Sanchez Long of Chattanooga, Tennessee and Darragh Kerin’s Rossco followed with the next set of clear rounds but their time of 32.210 seconds couldn’t beat Berry and Duvelke’s time.

Boggio and Victoria Press’ Quesada D’elle followed with the next clear rounds and with a clear second round in a time of 29.567 seconds, temporarily took the lead.

“He [Rheinheimer] had set a vertical to six strides to a triple bar then five strides to an in and out and some folks had problems with that. He definitely didn’t hand us that line,” said Berry.

Berry followed with Fazous and challenged that time with their own double clear rounds and with a time of 29.055 seconds, took the lead and set the new time to beat. “I just had to go faster. I had the lead then Chase [Boggio] took it back so I just went a little faster with Fazous,” he said.

Jorge Ludwig of Newbury Park, California and his own Cricket sat in the enviable last to go position. Although the pair advanced to a second round, four jump faults in a time of 29.701 seconds would see them finish in seventh place and leave the win to Berry and Fazous.

Second place honors went to Boggio and Quesada D’Elle and Berry picked up a third with Andrew Kocher’s Duvelke.

Berry kicked off his winning week when he snatched up the top three placings of the Welcome Jumper Classic during Week I of the Atlanta Spring Classics. There were eight entries in the competition, with five pairs returning to the ring for the jump-off.

Berry, of Verona, Virginia, claimed the championship with Lee Cesery’s Quantos. Together they bested the other contenders, flawlessly completing the first round well within the time allowed of 81 seconds. Their jump off round was equally as seamless, with the duo finishing the shortened course in a clean and quick 36.857 seconds — one of two double clear efforts in the event.

The other double clear performance was also care of Berry, this time in the irons of Oak Ledge Farm’s Fazous. The pair left all the jumps up, but finished in 37.672 seconds — just a fraction of a second behind the winners.

Berry rounded off the top three placings for his ride aboard Andrew Kocher’s Duvelke. A clean first round gave the pair a shot at the jump-off, but a fallen rail at the last fence and a time of 37.268 seconds landed them the yellow ribbon.

Jorge Ludwig, riding his own Athenea, finished the class in fourth place. Ludwig, of Newbury Park, California, guided Athenea to an eight-fault jump off round, reaching the finish line in a speedy 34.824 seconds. The fifth place ribbon was awarded to Canton, Georgia’s Heather Steinman, who was completing with Maarten Huygens’ Justin. The pairing completed the second round in 42.159 seconds, accruing 12 faults.

Ludwig was back in the ring to pick up sixth prize for his ride with his own Cricket. Seventh place was awarded to Aida Sanchez Long, of Chattanooga, Tennessee, who was in the saddle of Darragh Kerins’ Rossco. Ludwig rounded out the placings, ranking eighth with his own The Graduate.

Berry commented, “The horses went really well and the horse show was really good. The show management did a lot with the footing from schooling day throughout the week and it’s just getting better every day. Next week will be even better. Any shows that Classic Company manages, they just do better every time. There is always a major improvement, every year. Like the permanent restrooms in Gulfport were awesome this year. Some of the improvements are simple, but for other show managers, it’s like you have to pull teeth to get them to make any improvements,” he added. “Next week will be my Week 10 on the road, but I’ll be showing here in Conyers,” he said.