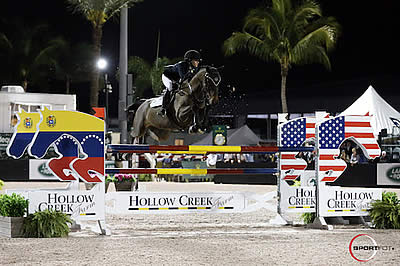 Friday’s team competition was the third event of the Hollow Creek Farm Under 25 Grand Prix Series for the 2017 WEF circuit. The class was held in the Global Arena at the Adequan® Global Dressage Festival show grounds at PBIEC, with 14 teams showing over the Richard Jeffery (GBR) designed course in round one. The best seven teams returned to jump a second round, but only six teams completed round two. When two teams finished with four faults overall, a tie-breaking jump-off was held, where one rider was chosen to represent each team.

Team Sweet Oak/Vlock came out victorious, as Brett Burlington jumped a clear round over the short course, representing her team aboard Alden Burlington’s Bluf. Team USA/Ireland finished second after Lucas Porter and Sleepy P Ranch LLC’s Diamonte Darco knocked a rail at the second fence in the jump-off and elected to retire.

Also riding for the winning team, Kaely Tomeu and Siboney Ranch’s Contenance 15 jumped double clear. Lacey Gilbertson and Seabrook LLC’s Baloppi jumped clear in round one and earned the drop score of four in round two. Teddy Vlock and Vlock Show Stables’ Cristobar incurred four faults in round one and jumped clear in round two, while Burlington and Bluf scored four and zero, followed by their clear jump-off round to secure team victory.

Burlington (17, Miami, FL) has ridden Bluf, an 11-year-old Dutch Warmblood gelding (Ukato x Placido), for almost two years and was selected as the jump-off participant due to her experience with her horse.

“Coming into tonight, I was definitely pretty confident because I have done this with him before,” Burlington stated. “I have jumped him under the lights a bunch, and he has always been really good. I was definitely happy with the way he went. The first round was a bummer at the last jump, but he still jumped really well. Then obviously in the second round and the jump-off he was really good.”

Tomeu (21, Wellington, FL) was aboard a new mount since December in Contenance 15, an 11-year-old Westphalian mare (Cornet Obolensky x Darco).

“I am still figuring her out, but I think tonight proved that we are a pretty good match,” Tomeu noted. “I was pretty excited for tonight. We won this event two years ago, and last year we ended up third. Lacey, Brett, and I are normally on the same team with one extra person, which Teddy was lucky enough to be this year. We are always really excited for this. It is just neat that it is a team, and we are all in the same barn. We are all friends, which makes it fun.”

Gilbertson (23, Lake Forest, IL) was riding an even newer horse in the 10-year-old Danish Warmblood mare, Baloppi, which she just purchased two weeks ago.

“I wanted to go in tonight and have some pretty confident rounds; I’m still figuring her out,” Gilbertson stated. “She was amazing. She saved me in places where she needed to, so I am very grateful to her, and I am very excited for what is to come with her.”

Vlock (19, Branford, CT) was aboard Cristobar for Friday’s competition, an 11-year-old Westphalian gelding (Cristallo x Lancer III) that he has ridden for almost two years. While Burlington, Tomeu, and Gilbertson have experience competing in the U25 team event, Vlock was showing in the class for the first time, and only his second U25 competition.

“This week was my first time showing him at WEF, so I was really happy with it,” Vlock detailed. “He jumped super. He is good at everything he does. He is kind of everything you could want in a horse, which I love.”

Vlock added, “Most of the time I don’t get very nervous, but I wanted to do well for my team tonight. This was the first time I ever had other people counting on me to do well, so I was really happy that I could contribute and jump a clear round.”

The Hollow Creek Farm Under 25 Grand Prix Series, presented by The Dutta Corp. in association with Guido Klatte, has been expanded to ten events offering a total of $215,000 in prize money for the 2017 season. Developed as a bridge to the international level of grand prix competition, the Series gives athletes, both human and equine, an opportunity to compete under a myriad of conditions, including jumping on grass, under the lights at night, and in team competition; all important elements that competitors will face as their international careers progress. The series concludes with a $50,000 Hollow Creek Farm Under 25 Grand Prix Final, which the top 30 riders in the point standings will be invited to contest on Sunday, April 2.

Parot purchased Dazzle White in early 2016 and quickly earned two grand prix victories, topping May’s $130,000 Split Rock Grand Prix CSI 3* in Lexington, KY, as well as July’s $130,000 Wellington Equestrian Realty Grand Prix CSI 3* in Tryon, NC. The gelding then injured his knee in September and was out of work for four months. He jumped again for the first time in December and showed in week two at WEF.

“This is his second show back, and he is perfect now,” Parot stated. “I think he is a top horse. He has a lot of scope, and for these speed courses where you need to turn very short, for him it is no problem.

“I think I won the class in the turn from one to two, and also from the skinny to the oxer,” Parot added. “I made those turns very close. He can make very short turns easily.”

“I was lucky enough to be able to keep him after I was no longer a junior,” Kelli Cruciotti said. “He just comes out sporadically, but he really likes to horse show and loves every minute of it. I did a 1.10m schooling class yesterday and then went in and did this. We’ll play it week by week going forward, but he’ll probably have a couple weeks off. He loves to do the [hunter] derbies too so we mix it up. He does it all and is fantastic.”

“He’s a creature of habit,” Cindy Cruciotti added. “He likes his morning rides and gallops. He comes out, knows the job and the routine, and is happy.”

After an over fences phase and a flat phase, Yasmin Rizi earned second place with Canny Windsor Z, while Maya Nayyar earned the third-place ribbon.

“I thought the course was very nice,” said Kelli Cruciotti of Anderson Lima’s design. “It was very even on both leads and challenging. The related distance from the oxer to the water to the vertical was the most challenging test. You had to ride the water a little bit and then come back for the vertical. The rest was just making it smooth and even off the left and right. I thought the course was really well designed.”

The fourth week of WEF continues on Saturday with the $35,000 Suncast® 1.50m Championship Jumper Classic featured in the International Arena during the day. The fourth “Saturday Night Lights” event of the season, the Great Charity Challenge, presented by Fidelity Investments®, will be the highlight in the evening with competition starting at 6:30 p.m. The Beval Palm Beach Adult Medal will decide a winner in Ring 6. For full results, please visit www.PBIEC.com.