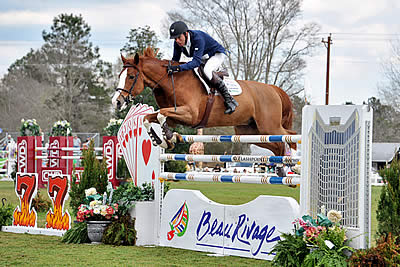 It took more than luck today to win the $77,700 Governor’s Cup Grand Prix, presented by Beau Rivage, when Bugatti, owned by Eduardo Leon and ridden by Wilhelm Genn of Lebanon, Ohio, won the class in front of a sold out VIP tent and standing-room only crowd at the Harrison County Fairgrounds.

With Steve Stephens designing and the big prize money offered, everyone knew it was going to be tough.  “I thought it was a good course; you really needed to be on the whole time.  You could have had a rail anywhere,” said Genn.

Stephens has a well-regarded reputation and is the most well-known course designer in the world.  His extensive resume includes top international show jumping events as well as the 2008 Beijing Olympics.

And while Stephens designed the course with challenges lurking throughout, twenty four horse and rider teams inevitably had rails down somewhere.  But they all stayed up for Wilhelm and Bugatti and in the end; that is what secured them the win.

Devin Ryan of Long Valley, New Jersey and Sima Morgello’s Chantilly were the second to go in the ring and the first to go clean in a time of 83.964 seconds, well within the 90 seconds allowed.  Timothy Maddrix of Monkton, Maryland followed suit with Claudia Styslinger’s KT Cher, who also turned in a clean first round effort in a time of 87.485 seconds.

It took a dozen more trips before another pair would emerge fault free after a first round and it was Genn and Bugatti who went clean in a time of 89.999 seconds.

Shannon Hicks of Lake St. Louis, Missouri joined the jump off as the last to go clean with Helen Gilbert’s Yes Sir.

“I was hoping to get five to go clean, and I got four,” said Stephens. “I’m happy with those results,” he added.

Stephens set the jump off time at 50 seconds.  Ryan and Chantilly were the first to go and looked to go clean, but a rail at the combination would result in four faults and a time of 37.651 seconds and a second place overall finish.

Maddrix and KT Cher were next to go, but three rails down would earn them twelve jump faults in a time of 44.587 seconds and finish them up in fourth place overall.

Genn entered the ring with Bugatti and hoped to make it clean.  “The horseflight combination, which I thought was a difficult combination, to the planks with the flat plank on top, the line with the liverpool to the CWD jump for sure was tough and the last combination and well, the last jump too.  It was tough,” he said.

But in Genn style, he made it look easy.  He and Bugatti finished clean in a time of 47.051 seconds.

The dash for cash was on and Gilbert and Yes Sir looked to unseat Genn, but with a rail down and four jump faults in a time of 43.291 seconds, they would finish in third place overall.

“Bugatti jumped his first grand prix in January and he won’t be eight until June.  I could talk about him all day. I am super proud of him, “said Genn.  “He jumped double clean on Friday [$25,000 Welcome Prix], so we didn’t jump so much today to warm up, just enough to get the adrenaline flowing.  He really stepped up and that to me, that’s a good horse.”

Bugatti’s owner, Eduardo Leon, originally from Mexico City and now from Houston, Texas, said, “Bugatti is a very careful horse.  He is still so young and a little green. We just started him in the grand prix in January and he is just at the start of his career,” he said. “I found Bugatti in the Netherlands when he was four and he has been with the Genns since he has been five,” he added.

“The Genns are amazing riders and such a nice family,” said Leon. “They are the most professional family I have ever known,” he added.

“I thought this event was amazing.  It just keeps getting bigger, better and more exciting!  We love it!” commented Mississippi State Treasurer Lynn Fitch.

Gulf Coast Classic Company President added, “I thought today was phenomenal; the course was challenging, the riders were great and for our spectators and our first time horse show spectators that came to watch, they thought it was the most exciting sport they have ever seen,” commented Bell.  “We had over 200 people in the VIP tent that had never seen show jumping before and they gave us nothing but rave reviews,” he said.  “To see the community engaged at this level is a testament to the success of this event,” he added.

Don’t get left out next week for the Gulf Coast Classic’s Grand Finale!  Reserve your VIP table this week and enjoy a ringside luncheon next Sunday for the final grand prix of the 2014 Gulf Coast Winter Classic.

Grand prix tables are only $325 a week and feature some of the best food on the Gulf ringside!  Make sure to see Jonathan in the show office to secure your table today!

Did you miss today’s action?  Well it’s not too late to enjoy live grand prix show jumping at the Mississippi Gulf Coast Classic right from the comfort of your own home anywhere in the country, for free!  Click on this link and catch the action LIVE and FOR FREE!