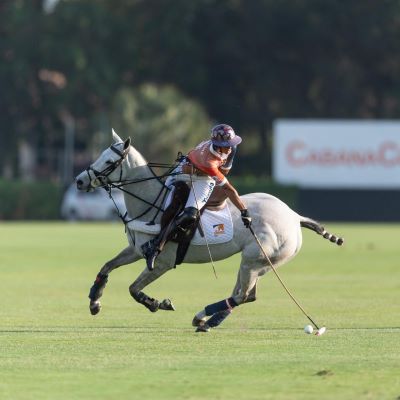 (Wellington, Fla.) March 30, 2021 – Brooke USA’s Sunset Polo® & White Party | Special Edition: Latin America, presented by Lugano Diamonds, proved to be an astounding affair, receiving rave reviews from the Wellington, Palm Beach, and Miami social scenes. Held at the International Polo Club Palm Beach with an exclusive guest list of only 350, the event provided an entertaining evening highlighted by its exciting signature Sunset Polo, gourmet Latin cuisine curated by Celebrity Chef Ingrid Hoffmann, and a live band, the Miami-based Tartara. The event raised more than $210,000 for Brooke USA, whose mission is to alleviate the suffering of working equines in some of the poorest parts of the world.

“We are thrilled with the results of our event, not only financially, but also because it allowed us to further our mission. We made new friends and supporters and educated those present about the plight of working equines and the families who own them,” Chair of the Brooke USA Board of Directors Katherine Kaneb remarked. “It is important to understand that these animals are the engines that fuel the developing world and if they are healthy and cared for, families will benefit from better living and working conditions.”

Brooke USA strives to significantly improve the welfare of working horses, donkeys, and mules and the people they serve throughout Asia, Africa, the Middle East, the Americas, and the Caribbean by raising funds and responsibly directing them to the areas of greatest need. The 2021 special edition event focused on the Americas, with program funding benefiting Nicaraguan fodder plots, COVID-19 response and recovery, advocacy to end the donkey hide crisis in the United States, and its newest project, scoping and research of Native American Reservations attitudes towards working equines.

“As Brooke USA grows, so do our investments in this hemisphere. We were thrilled to offer a means of support that focused on our work in the United States and Central America,” stated Emily Dulin, Brooke USA CEO.

The tournament kicked off with Team Celebrity Cruises, made up of Mikey Matz, Whitney Ross, Marcos Bignoli, Tareq Salahi, and John Gobin challenging Team GJ Racing, the 2019 defending champions. Riding in orange for GJ Racing were Ignacio Cabrera, Timmy Dutta, Jake Schaufeld, and Jessie Graham. Salahi scored one goal in the opening chukker to secure the lead, and his alternate, Whitney Ross, made the second goal in the second chukker to take the first win with a 2-0 finish.

With one win under their belts, Celebrity Cruises then faced off against Team Invicta Farm, consisting of Annalise Phillips, Alyssa Braswell, Michel Dorignac, and Milo Dorignac. Salahi scored the first two goals of the second game, while Invicta scored one goal by Dorignac. Celebrity ultimately snatched the win with a 3-1 victory when Mikey Matz scored the final goal to take the win.

In the decisive last two chukkers, Team Invicta challenged Team GJ Racing in a match that went down to the wire as Invicta took the early lead with both Braswell and Dorignac scoring in the fifth chukker. Dutta tied up the game in the final chukker for GJ Racing with two back-to-back goals; however, Milo Dorignac pulled Invicta ahead with the final goal scored, securing the win with a 3-2 finish.

For more information or to donate, please visit www.brookeusa.org.