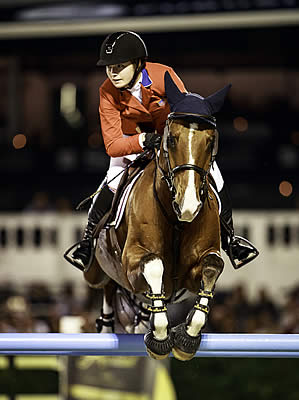 Barcelona, Spain – The Furusiyya FEI Nations Cup™ Jumping Final came to an exciting conclusion at CSIO5* Barcelona Saturday evening. Led by Chef d’Equipe Robert Ridland, the Hermès U.S. Show Jumping Team of Audrey Coulter, Lauren Hough, Lillie Keenan, and Laura Kraut stood strong against tough competition in the Final’s second round. Building off the momentum from a Silver-medal win at the Rio Olympic Games in August, the U.S. once again stood on the podium, this time earning Bronze. In a sensational evening for the sport, Great Britain and Germany battled it out for top honors in a jump-off. Germany ultimately took Gold, while Great Britain won Silver.

Riding as pathfinders for the U.S. over Santiago Varela’s big and technically demanding course was Hough (Wellington, Fla.) and The Ohlala Group’s Ohlala, a 2004 Swedish Warmblood mare. The pair had a brilliant round until the last fence, an oxer set a long six strides off the triple combination at 12. Hough rode forward, but ended up long, taking the top rails down for a four-fault total.

Next in the order was Coulter (San Francisco, Calif.) and Copernicus Stables, LLC’s Capital Colnardo, a 2005 Holsteiner stallion. With rails down at fences 3 and 12c, the pair added eight faults to the board.

Prior to the final round, the U.S. replaced Lucy Davis and Barron in the team’s starting order due to minor swelling in Barron’s forelimb. The gelding is expected to make a full recovery. Davis and Barron contributed to the final round qualification with a clear round in the opening competition on Thursday. As the alternate members of the team, Keenan and Super Sox stepped into the order. Keenan and Chansonette Farm LLC and Ronnoco Jump Ltd.’s 2006 Hanoverian gelding delivered a clutch clear round in their Nation Cup Final debut.

Preceding the U.S. in the final rotation was Ireland, Switzerland, and Italy, with each nation adding four faults to put all on a five-fault total. With Great Britain and Germany securing zero-fault round-one totals, the door was open for the U.S. to secure a Bronze medal with a clear round from anchor rider, Kraut. Aboard Old Willow Farms, LLC’s Zeremonie, a 2007 Holsteiner mare, Kraut (Royal Palm Beach, Fla.) rode with steel nerve to deliver the necessary clear round to secure a podium finish for the U.S.

“The course was very tricky. There were options for striding in almost every line,” said Kraut. “It was fortunate for me that I went late in the class and had a lot of time to make up my mind on what would be best for my horse. Initially after walking the course, I thought adding strides would be best, but as I watched, leaving strides out seemed to be working better, especially with the tight time allowed. I was very pleased with my round. Zeremonie is young and that was a lot of pressure on her.”

Speaking to the team’s overall performance, Kraut noted, “Obviously we like to win, and we were one fence away from being in the jump-off, but this was a strong finish for us. Lillie pulling through in the 11th hour and going clear was an amazing feat. Audrey was great; it just wasn’t her week, but she rode really well.”

In the jump-off, Great Britain was first in the order and opted to send forward 2016 Individual Olympic Gold medalists, Nick Skelton and Big Star. The pair jumped clear in 41.57 to put the pressure on Germany. With the advantage of knowing exactly what was needed to secure the win, Marcus Ehning and Pret A Tout delivered for their nation, going clear in 39.80.

Find out more about CSIO5* Barcelona