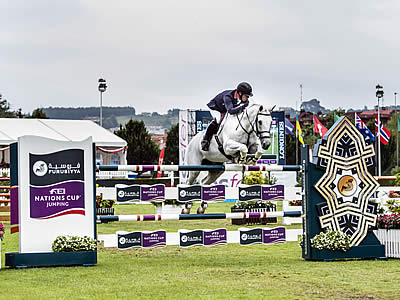 Gijón (ESP), 27 August 2016 – Great Britain pipped Spain by a slender one-fault margin in the nail-biting last qualifying leg of the Furusiyya FEI Nations Cup™ Jumping 2016 series at Gijón (ESP), where Robert Bevis was the hero of the day when sealing victory with a last-to-go clear from Courtney Z. In a competition filled with surprises, it was The Netherlands that lined up third ahead of Switzerland in fourth, while the Canadian side that included Rio 2016 individual Olympic bronze medallist Eric Lamaze finished in fifth place.

Italy finished sixth, France seventh and Ireland lined up last of the eight teams that made the cut into the second round from a starting field of 12 nations.

The colourful track set by Spanish course designer Avelino Rodriguez-Miravalles proved remarkably difficult in the first round of the competition when only four of the 47 horse-and-rider combinations managed to turn in a fault-free performance. But in one of those familiar contradictions that go hand-in-hand with the Nations Cup format, there was a dramatic improvement in round two which was gripping to the very final moment.

Egypt, Mexico, Portugal and Norway were already out of contention at the halfway stage, the three-member Egyptian side only losing out on the clock when four countries were tied on 17 faults at the end of round one.

It was the British who led the way at the halfway stage when opener Tim Stockdale (Fleur de l’Aube) and third-line newcomer Samuel Hutton (Happydam) posted two of those four precious first-round clears. That allowed them to drop the eight collected by Joe Whitaker (Lola V) leaving only Bevis’ single mistake at the 1.60m vertical at fence eight on their score-card. The line from the previous 4m-wide open water to this vertical and on to the following hedge-filled oxer at fence nine required accuracy, and the course-plan then sent them snaking around to another vertical at fence 10 before confronting the biggest question on the course.

The penultimate water-tray oxer was followed by a sharp right-hand turn to the final double, and here Rodriguez-Miravalles presented them with a vertical topped with a white plank followed by a coloured oxer. This took a huge toll, almost half the field faulting at the first element in round one, while 12 of the 32 starters left at least one of the elements on the floor in round two.

The Canadians were two fences behind the British leaders as the second round began and the only double-clear of the entire competition from their pathfinders Elizabeth Gingras and the super-cool Zilversprings, who didn’t seem to have a care in the world all day, kept them right in the game. But an additional 12 faults from the remaining team members sent them plummeting down the leaderboard, while, next in line, the Swiss and French also lost their grip when adding eight and 13 faults apiece.

The Dutch did really well to add just four to their 16-fault first-round scoreline thanks to fantastic clears from 25-year-old pathfinder Doron Kuipers (Zinius) and 18-year-old Sanne Thijssen (Captain Cooper), the latter showing great maturity second time out having experienced a scary moment at the open water at her first attempt. For all that, however, it was the Spanish who held fastest when adding nothing to their 17-fault first effort when Eduardo Alvarez Aznar (Fidux), Gerardo Menendez (Cassino DC) and Sergio Alvarez Moya (Arrayan) were all foot-perfect this time out. And that heaped the pressure on the British leaders.

Stockdale and his lovely mare put four on the board second time out, and when Whitaker hit fence eight along with both elements of the dreaded final double and then Hutton lowered the last element of the triple combination at six and the first element of the final double it all came down to Bevis and his 15-year-old grey. Even discounting Whitaker’s result his side already had 12 faults to add bringing their total to 16 and only a single fault behind the Spanish now. You could hear a whisper as the home crowd watched him entering the arena, but the 50-year-old veteran didn’t flinch, steering the horse that carried him to a double-clear at the Europe Division 1 Furusiyya leg in Dublin (IRL) last month to a serenely smooth tour of the track to clinch it.

British Chef d’Equipe, Tony Newberry, said afterwards that he always thought his side could do well. “From the moment we saw the course plan we got excited because we knew we had a chance of winning!” he said. Talking about the course, 27-year-old Samuel Hutton said the final double was by far the biggest test on the track, while Whitaker explained that while his mare coped well in the first round it wasn’t so easy for her second time out. “The good news is that the rest of the team pulled together so we could win!” he pointed out.

Tim Stockdale was delighted with the performance of the mare who has brought the 52-year-old Olympian right back into the limelight, while Bevis pointed out that his entire side all went into the competition in a good frame of mind.

“Our horses have all been jumping well with good results over the last few days so you have to be confident; otherwise there’s no point in going into the ring anyway!” When asked what he was thinking when last to go in the competition, he explained, “Tim just said to me: you gotta jump clear; don’t worry, just go in there and do it! So I didn’t really think about it; I just got on with it!” Bevis added. And he was delighted with Courtney Z. “I was chuffed with him today,” he said “He’s a really great horse and a good friend to me, you know!”

Jesus Martínez (Sports Council of Gijón and President of the Show): “This is the 74th edition of the competition and we know that is a very important event for our city that fills the stands of the racecourse of Las Mestas.”

Sergio Alvarez Moya ESP: “I come from Gijón so it was an honour for me to compete here today. It’s a shame we didn’t win, but we’re happy!”