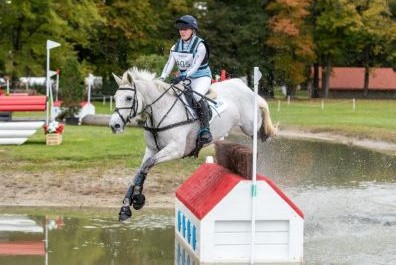 Libby Seed with the 10-year-old Heartbreaker Star Quality was the winner of the CCI4*-L, the highest ranked class of Strzegom October Festival.

Libby Seed took the lead after a smooth cross-country, although she crossed the finish line six seconds late. That still made her jump up from fourth after dressage. She went over the showjumping clear on the fences, with only 0,8 for time. Second place went to her compatriot James Sommerville with Talent, and Miroslav Trunda from the Czech Republic was third riding Shutterflyke.

Victory in the 3*-L after clear cross-country and jumping rounds belonged to a veteran of Strzegom’s events – Germany’s Andreas Dibowski riding Calahari. Vanessy Bölting with Ready To Go W was second, and Swedish rider Sara Algotsson Ostholt with Dynamite Jack was third.

Saturday’s cross-country rounds ended the rivalry in the short-format 3* and 4* classes. The podium went to German athletes in both. Anna Lena Schaaf riding Fairytale 39, the best one in the 4*, took the lead after dressage and did not lose it until the end. Sandra Auffarth with The Phantom of the Opera was sitting in 8th after the first trial, but a clear jumping round and only some time penalties in the XC secured her second place. Antonia Baumgart riding Lamango had some time faults and had to settle for third.

Libussa Lübbeke with Darcy F was victorious in the 3* after going through the cross-country only 4 seconds late. Pia Münker with Cascada was second, and Sandra Auffarth with Viamant du Matz was third.

The win in the CCI1*-Intro, after flawless showjumping and cross-country runs, belonged to Poland’s Karolina Miś with Go Jack.

The European Youth Eventing Masters was dominated by Germans, who took the win in all age categories, both as a team and individually. Julia Warner with Clara, Christina Schöniger riding Schoensgreen Continus, Brandon Schäfer-Gehrau with Parkmore Emper, and Felicia Von Baath with Quantum E were the best in the young rider category. The last one of them was also the winner individually.

Strzegom October Festival was a jubilee 50th international show at the hippodrome in Morawa. 12 classes were played out, with almost 400 pairs from 23 countries.