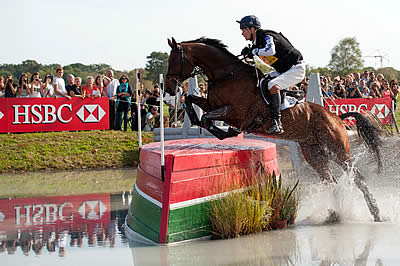 All three of Fox-Pitt’s horses, the leader Seacookie, Cool Mountain (second) and Neuf des Coeurs (third), went brilliantly and finished inside the optimum time of 11 minutes 48 seconds. A large crowd, enjoying the bright sunshine, showed their appreciation as they loudly cheered him home on Cool Mountain, the last of the 76 Cross Country starters.

“They were foot perfect,” said an understandably elated Fox-Pitt, naming the athletic, French-bred Neuf des Coeurs as the best galloper of the trio. “They’re all horses I know well and they’re all good jumpers.”

However, although he has three chances for a second Pau victory tomorrow, Fox-Pitt does not have a Jumping fence in hand over the competitive American rider, Phillip Dutton on new mount Mr Medicott, who is breathing down his neck in fourth place.

“It’s pretty neat to have the ride on him,” said Dutton, who recently took over Greman Frank Ostholt’s 2008 Olympic gold medallist from compatriot Karen O’Connor. “The idea of coming here was to get used to Pierre Michelet’s courses and walk his lines (before next year’s Alltech FEI World Equestrian Games in Caen).”

The home side’s star of the show was 26-year-old Maxime Livio (FRA), a newcomer at this level, who also competes in Jumping. He put in a great performance on Cathar de Gamel, winner of the Sandillon (FRA) and Haras du Pin (FRA) CIC3*s this year, and is in fifth place.

“We’ve had a really nice season, so perhaps it’s not such a surprise to do so well here,” said Livio. “But I was quite surprised that my horse could go so fast over a course that’s nearly 12 minutes and I’m feeling pretty impressed to be sitting here in a press conference with these two superstars [Fox-Pitt and Dutton].”

Last year’s winner Andrew Nicholson (NZL) had mixed fortunes. He is in sixth place after a smooth performance on Mr Cruise Control, but he had a run-out with Quimbo, equal fourth after Dressage, at fence 20 and he retired his first ride, CCI4* newcomer Viscount George.

Britain’s Sarah Bullimore rode two great clear rounds inside the time to rise eight places to seventh on Valentino V, and 34 places to 15th on My Last One. Donatien Schauly (FRA) made it look easy on Pivoine des Touches to climb 11 places to eighth, and Clark Montgomery (USA) on Universe and Rodolphe Scherer (Makara de Montiege, FRA) rose 22 places apiece to ninth and 10th.

Dressage leaders Lucinda Fredericks (AUS) and Flying Finish were quick across the country but are out of contention after a frustrating run-out right at the end of the course at the influential complex at 25. Some riders who were up on the clock, including Fox-Pitt, had the luxury of taking the long route here.

Lucy Wiegersma (GBR), sixth after Dressage on Simon Porloe, retired after a refusal at the duck-shaped fence in the first water complex, and Frank Ostholt (GER) and Little Paint, lying eighth, were pulled up near the end of the course.

There were 35 clear rounds, nine of them inside the optimum time, and 53 completions, but Pierre Michelet’s accuracy questions certainly had riders thinking and made for a thrilling day’s sport.

William Fox-Pitt commented that he was surprised by the amount of problems at the first water complex. “Horses didn’t seem to read it that well. There were all sorts of ways you could approach it and it was interesting to watch.

“By contrast, it was amazing how well horses coped with the last water. You don’t meet many fences with five elements, under trees and involving water, but it just shows how good our horses are now.”

Watch tomorrow’s Jumping action live on FEI TV www.feitv.org and keep up to date with the scores throughout on www.event-pau.fr.