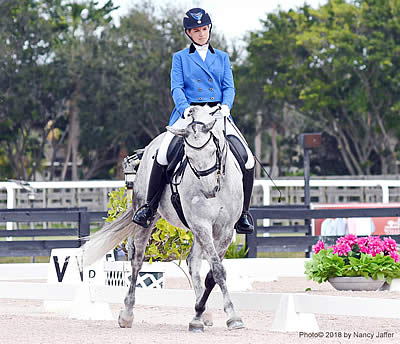 Bridget Hay has a simple reason why she began breeding dressage horses at her Hunterdon County, N.J., farm.

“It started years ago because I could never afford to import horses or buy well-bred horses,” she explained. “So I make them myself and train them myself.”

She has quite an array of homebreds at the Rainbow Ridge Equestrian Center, from which she has turned in successful performances at the US Dressage Finals presented by Adequan® in Lexington, Ky., the U.S. Dressage Festival of Champions in Wayne, Ill., and Dressage at Devon in Devon, Pa.

Hay, who operates Rainbow Ridge with her mother, Barbara, is one of a growing number of U.S. dressage breeders who are enjoying success in a discipline that long has been dominated by European warmbloods. She is unusual, however, because she not only breeds and foals her horses, but she also goes on to train and show them herself.

Bridget recalled that five years ago during Dressage at Devon, a man who was watching while she warmed up her stallion, Faolan, asked, “Why are people importing horses when there are horses like this bred in this country?”

But reconsidering the question this autumn, she commented, “My horses don’t start out moving the fanciest. But they have three decent gaits and the brain and temperament to be very trainable. You teach them how to move. I have to make them myself.”

Duval was spotted by Bob McDonald in a field at Leslie Malone’s Harmony Sport Horses in Colorado. McDonald, the husband of U.S. Dressage Technical Advisor Debbie McDonald, years earlier also selected Brentina, the Hanoverian mare purchased in Germany who headlined for U.S. dressage with his wife during the late 1990s and well into the 2000s.

Lyle thinks U.S. breeders have the potential to compete with those producing horses abroad.

“The possibilities are very good. There’s no reason, structurally, when you look at our country versus Europe, that we can’t replicate what they’ve done with breeding and training programs,” she stated.

There’s an advantage in finding top prospects in America “because the Europeans aren’t always going to let the best horses go,” she pointed out. And, of course, it’s possible to save money on a U.S. purchase, because the horse doesn’t have to be flown across the ocean and no expensive trans-Atlantic shopping trips are involved.

However, Lyle noted, “Right away we’re at a bit of a disadvantage because they’re (the Europeans) scraping the cream off the top. So if we can make our own cream here and keep it in the country, that would be hugely beneficial.”

Duval, she noted, “walked into Aachen (this year) and got a 75 in the Grand Prix. There was nothing holding him back there for being U.S.-bred.”

Lyle called Hay’s efforts “inspiring,” adding, “That’s one of the reasons I make sure I carve time out to help her. I really admire people who find a way to do this.”

Lyle observed that Hay is “mainly on her own, not with a big budget, but really trying to do things the right way and trying to get help any way she can.”

Hay’s example, she commented, “could show people you don’t have to be a huge multi-million-dollar factory in order to produce and train horses up to Grand Prix.  If we had more people like that, it betters our chances. It can be intimidating otherwise for people to think there’s any place for them in a breeding program, unless they’re some big state stud or something like that, but you don’t have to be.”

During Dressage at Devon this year, USEF Dressage Youth Coach George Williams told a group of competitors that it’s a goal to have at least some U.S. riders on U.S.-bred horses for the team at the 2028 Olympics in Los Angeles.

Williams, a former Grand Prix competitor and former president of the United States Dressage Federation, said that concept came out of a meeting among USEF dressage coaches, knowing “how important it is to use an event like this to set a goal. If we could have U.S. riders on U.S.-bred and -trained horses, that would be terrific. And certainly we’d like to be on the podium with that as well.”

There are precedents for U.S.-bred horses succeeding in key international championships. Hilda Gurney’s Thoroughbred, Keen, won team gold and individual silver at the 1975 Pan American Games, a pair of gold medals at the 1979 PAG, and was part of the 1976 Olympic bronze medal team. More recently, Paragon, from the Oak Hill Ranch in Louisiana, was ridden by Heather Blitz to team gold and individual silver medals at the 2011 Pan American Games.

“The thinking is that we want to use a major event, like having the Olympics back in this country for the first time since 1996, as a motivator to come together as a community of athletes, trainers, breeders, and owners and see what it can do for the U.S.,” Williams commented.

He believes it is realistic to think “we should be able to have at least part of the (2028) team on U.S.-bred horses.”

The prospects for future U.S. success are in the cards. A few years ago, Williams watched Lehua Custer’s horse, FJ Ramzes, at a California clinic and was impressed.

“I said, ‘This is the best horse I’ve seen in a long, long time,’” he recalled about Ramzes, who was bred by Cornell University and competed at the U.S. Nationals in 2017, when he won the Third Level Open.

Another of Custer’s promising horses, Fortunato H2O, was bred by Kendra Hansis’s Runningwater Warmbloods, located in the same New Jersey county as Hay’s operation. Hansis, an adjunct English professor at several colleges who began her breeding operation in 2001, explained, “I wanted to breed the kind of horse I could not afford to buy.”

Custer, who trains with McDonald and was Hilda Gurney’s assistant trainer for 10 years, spent the summer at Betsy Juliano’s Havensafe Farm in Middlefield, Ohio. The owner of Lyle’s 2018 FEI World Equestrian Games mount, Salvino, Juliano was inspired to buy a foal from Hansis and purchased the filly Starlight H2O earlier this year.

Juliano understands what American breeders have to go through to produce their prospects, and appreciates the desire to see U.S.-bred horses with U.S. riders in the Olympics and other championships.

But as she puts it, “Until you get behind these people, it’s not going to happen. I feel one of the next phases of development in my ownership career is going to be to look very seriously at the U.S. horses, and, when possible, buy them.”