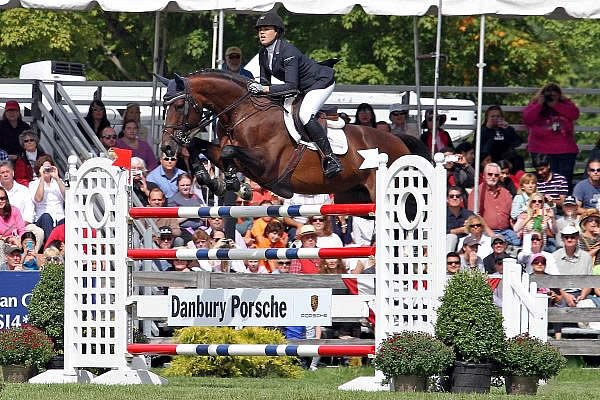 North Salem, NY – September 15, 2013 – On a perfect day in front of a sold-out crowd of over 4,000, 25-year-old Brianne Goutal added her name to the historical list of riders who have won the $200,000 American Gold Cup CSI4*-W, Presented by Suncast. Thirty-six entries gathered at Old Salem Farm for the international jumping competition, but it was Goutal and her talented mount Nice De Prissey that scored the winning honors after executing a quick and accurate jump-off effort. Tracy Fenney and MTM Timon laid down the first faultless round for second place, while Beezie Madden’s speedy four-fault round over the short track earned third with Coral Reef Via Volo.

Ireland’s Alan Wade presented many tests on the Grand Prix Field for today’s riders, including an open water, a skinny fence, a tall plank vertical, a vertical-oxer double combination, and an oxer-oxer-vertical triple combination. Ten of the original 36 starters advanced to the jump-off.

“I didn’t expect that many clear,” admitted Beezie Madden, currently ranked number two in the world. “I thought it was big enough, and I was surprised the plan didn’t cause more trouble. The double I thought was going to be difficult and it didn’t cause that much trouble. The triple combination I thought would be quite scopey and it only got a few. I thought the skinny at the end would be more difficult too. It jumped a little easier than it walked. The ground was excellent and there was some good jumping.”

“I knew that all the riders behind me are super-fast riders, so I just went at my speed,” admitted Fenney. “I was glad I didn’t have to watch everyone else go, because then you get crazier than you need to be, so it was good for me to go in and go the way I go. There weren’t any super tight turns; you just did a lot of galloping.”

Brianne Goutal and Nice De Prissey, owned by Remarkable Farms LP of Royal Palm Beach, FL, were ready to answer the challenge when they stepped on to the Grand Prix Field next for the short course. Utilizing her mount’s large stride, Goutal was able to race quickly to each obstacle and leave each rail untouched. They sped through the finish line in 40.18 seconds to capture the early lead.

“My horse has a huge stride, and I should have been able to do one less in the first line, but I didn’t get it,” explained Goutal. “My second line was slow into the double, so I thought if the other riders did the numbers quicker than I did they could catch me. Normally it’s easier to go at the end of a jump-off, but I think when you are jumping on grass it is easier to go at the beginning because you have better ground.”

Although Beezie Madden’s mare Coral Reef Via Volo, owned by Coral Reef Ranch of Rancho Santa Fe, CA, is one of the smaller horses on the circuit, she has a large stride and Madden was able to leave out strides in lines to stay right on Goutal’s heels. Unfortunately, she laid on the gas to the final oxer and incurred four faults, and although her time of 39.65 seconds was faster, the reigning World Cup Champion had to settle for the third place award.

“I took a shot,” said Madden. “I left a few strides out and took a chance and the last fence, and if it would have stayed up it would have been great.”

Charlie Jayne was just 2/10ths of a second slower than Madden with Chill R Z, owned by Maura Thatcher and Alex Jayne of Elgin, IL, and with an error at the vertical before the last fence their four-fault round would place fourth in a time of 39.86 seconds. With horses of a similar size and speed, Kent Farrington and Uceko, owned by RCG Farm of Ridgefield, CT, tied with Katie Dinan and Nougat Du Vallet, owned by Grant Road Partners of New York, NY, for the fifth place honors after they each lowered the height of a fence and broke the beam at 40.97 seconds to round out the top six finishers and seal Goutal’s victory.

Goutal began riding Nice De Prissey four years ago when he was just 8 years old. “It took me a little time to get used to him. He has a big stride and touchy mouth. Last year he started coming into his own and jumping consistently well. Now, I am feeling really good about the way he is jumping.”

The next stop for Goutal will be the New Albany Classic, and she hopes to qualify for the team at the 2014 Alltech FEI World Equestrian Games in Normandy, France.

This summer, Goutal began riding with Katie and Henri Prudent, who have helped produce some of the most talented young riders in the United States. “I trained with them a few years ago and I always said I was going to start riding with them again,” she said. “They are a great team. They are so fun, and I think when you have a team like that around you then you are very lucky. They have helped me a lot. I have great horses as well, so we are just fine tuning, and they see things that I don’t notice and I don’t think most people notice.”

Goutal also credits her barn manager Tatiana Gabrush with much of her success. “I am a mess to organize and we are always going back and forth from Europe to America,” she noted. “I am very disorganized in general. She is responsible for everything, and without her the whole thing falls apart.”

This marks the second year that the American Gold Cup has been held at Old Salem Farm, and the new home has proved to be a perfect match for the historical event. “This is a great show,” said Goutal. “I think it’s great to have this venue, and it’s going to become one of the nicest horse shows in America. I think we are all very grateful that it is here.”

Stadium Jumping created the American Gold Cup, and President Michael Morrissey commented, “This was spectacular. I think we’ve elevated the sport to where it needs to be. The crowd was wonderful. It has been a long time since we’ve had crowds like that. There is still room for a little improvement but I think this was a fantastic event at a fantastic facility. We won’t take a back seat to anybody.”

The American Gold Cup has proved to be one of the best events in the United States for many years, with the country’s top horse and rider competitions vying for the winning title and the opportunity to have their named on the prestigious trophy. This year, Brianne Goutal’s name will be added to the list of winners for her incredible effort during today’s international jumping competition.

Don’t Miss the Televised Broadcast. The 2013 American Gold Cup, Presented by Suncast, will be broadcast on NBC Sports Sunday, September 22 at 4:30 p.m. EST.