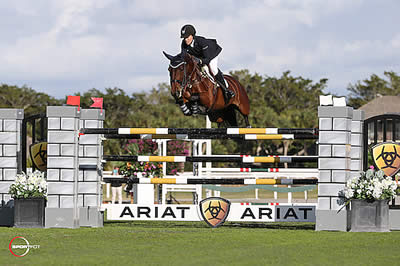 Olympic course designer Robert Ellis of Great Britain set the international courses at PBIEC for week five and concluded with a great track for 45 competitors on the field on Sunday. Seven entries were clear over the first round course to advance to the jump-off, and two went double clear in the tiebreaker.

Goutal and Ballade van het Indihof, owned by Remarkable Farms LP, were the fastest double clear in 47.10 seconds. Heather Caristo-Williams (USA) and Mr. and Mrs. Ralph Caristo’s Evening Star finished second in 50.78 seconds. Harrie Smolders (NED) and Copernicus Stables LLC’s Don VHP Z had the fastest round of the jump-off in 46.77 seconds, but a rail at the final fence put the pair in third place.

“I am thrilled,” Goutal said of her victory. “This week she has been amazing, but in general she pretty much only jumps good rounds. I was very disappointed not to have her for the last two years due to a couple of injuries and now that she is back, it is really just a pleasure every time you go in the ring. She is very strong, but she takes you right down to the big jumps. She is ultra-careful, so you are never worried. She is just something else. She is a freak of nature, and I am grateful every time I go in the ring with that horse.”

Goutal had to catch the clear round of Heather Caristo-Williams and Evening Star, but knew her horse could beat their time.
“Honestly, my horse is so fast,” Goutal said. “She wastes no time across the ground. She jumps very high, but somehow it is efficient at the same time. You never feel like you have really opened up. I just keep a high rhythm, a high canter and kind of let her go. She is so careful that you can kind of guide her and snake through a little bit. Heather had a beautiful ride, but I think her horse is a bigger mover, more bounding, and I think my horse is just really, really fast.”

Caristo-Williams explained that her horse had some time off last year and is just coming back to this level of competition, and she was thrilled with his performance.

“I was really happy with my jump-off in general,” she stated. “It has been a little while since I have been able to be in a jump-off with these guys, so I just wanted to do what was right for my horse. There was that pillar placed before the combination. I went inside that in the class on Friday and we had a little trouble and had the last jump down in the WEF (Challenge Cup), so I knew that I was not going to make that mistake twice. I wanted to do what was best for my horse and I know it was a slower option, but at that point going against everyone else here, I was just really happy to be efficient and go for a clear round.”

“It is so much fun out there,” Caristo-Williams added. “I love the jump-offs and I am just so happy to be able to go in there. I gave him the summer off because our end of the season last year we kind of went a little bit downhill, which is odd for him because he really is a trier. Now we are just kind of getting back into it again and peaked today, so that was nice.”

Harrie Smolders had the time in hand with Don VHP Z, but took extra risk in his jump-off course with the knowledge that Goutal and Georgina Bloomberg were still to follow. The risk did not pay off when he had the final fence down, but Smolders was happy with his horse. He began riding Don VHP Z last year and has already developed a great partnership.

Commenting on his round, Smolders noted, “My horse I think is naturally a slower mover than Brianne and Georgina’s horses, so that is why I had to take a bit more risk to put on the pressure. I think we were a bit unlucky today because I think Don is in really good shape and he deserved to go clean.”

“I think I am starting to know him better and our results are getting there now,” Smolders stated. “He is a great horse. He is really scopey. Now I am looking forward to the future with him.”

The last time Smolders competed in Wellington was in 2012, and he has seen great growth in the level of competition in the last few years.

Goutal proved a great combination with Ballade van het Indihof this week, and with her success, was presented with the Leading Lady Grand Prix Rider award, presented by Martha Jolicouer in memory of Dale Lawler. She also accepted the Champion Equine Insurance Jumper Style award to conclude week five.

On the final day of WEF 5 competition Tori Colvin and Inclusive were named champions of the Antares Large Junior Hunter 16-17. Inclusive, owned by Dr. Betsee Parker, won three of the four over fences classes, along with a third place finish in the handy hunter round. Colvin exclaimed, “Today he went amazing! He went very slow and nice.”

Further Lane Farm’s horse, Stellar, was ridden to reserve championship honors by Sophie Michaels. The pair was first and second over fences and won the under saddle.

This week was Inclusive’s 2015 WEF debut. “He [Inclusive] was a little nervous yesterday. He used to be a jumper, so he went into jumper mode and got a little fast,” Colvin commented about her horse’s performance.

Despite having a long break, Colvin and Inclusive have been working together for the past five years. Although he was a little out of practice the first day, the second day Inclusive was back to his winning ways. “I know him [Inclusive] very well. He is my best friend, he can have his days, but he steps it up in the ring,” Colvin said.

“In the handy round I did the skinny trot jump, which was fun for him [Inclusive] because the spookier the jump, the better for him,” Colvin smiled.

Looking ahead to next week, Colvin is planning on riding Inclusive in the $100,000 WCHR Peter Wetherill Palm Beach Hunter Spectacular. Colvin has won the class for the past three years and is excited to try and defend her title this year. After WEF, Colvin hopes to qualify Inclusive for the Devon Horse Show and the Indoor Finals.