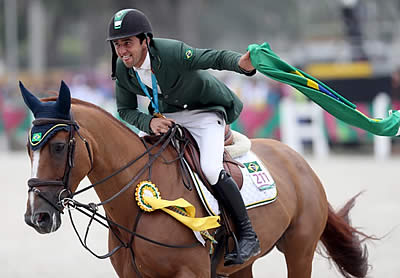 Brazil was atop the podium yet again, as Marlon Modolo Zanotelli jumped to gold in the Individual Jumping Final at the Pan American Games 2019, taking place at the Army Equitation School at La Molina in Lima, Peru.

Modolo Zanotelli and the brilliant 13-year-old Selle Francais mare Sirene de la Motte, part of Brazil’s gold medal winning squad in Friday’s team final, produced the only double-clear performance on the day, finishing on a perfect 0 score. The duo navigated course designer Guilherme Jorge’s (BRA) tracks with ease despite their apparent difficultly, with only five total clear rounds recorded over the course of the two rounds.

“[Going into] the second round, I just tried to keep myself calm, because I knew if I gave my mare a good chance, she was going to jump a clear round,” Modolo Zanotelli said. “I had to keep my nerves in place. For me, I was in a good position. I was first to go of the clears, and I knew if I was clear, it would put the pressure on the others.”

Out of the 32 riders to make it to the final day of the competition and the 22 to advance to the final round of jumping, Argentina’s José María Larocca, Jr. (Finn Lente) came closest to matching the victor. A single time fault in the second round aboard the 9-year-old Dutch Warmblood gelding left him on a score of 1. The result also clinched an individual quota place for Argentina at the 2020 Olympic Games in Tokyo, Japan.

“I wanted a medal. That was the objective, and incredibly, it happened!” Larocca, Jr. said. “Miracles do happen. I have 20 to 25 family members here. I’m very lucky to have the support!”

Larocca, Jr. is an amateur rider who works in commodities trading. He juggles his time between his work, his family, and his horses.

“It was the dream, and this dream started four years ago, when [Argentina] took the silver medal as a team [at the Pan American Games in Toronto, Canada],” he said. “This time, unfortunately, we couldn’t make it to the podium as a team, but I had the opportunity to make it as an individual. I’m very happy. I’m proud of my horse and my team. I’m living my dream today.”

It was also a thrilling finish for the bronze medal, as four riders finished on 4 faults, leading to a jump-off. The USA’s Beezie Madden (Breitling LS), already bringing home a bronze medal from Friday’s team competition, earned a second, crossing the timers of the shortened course with a clear round in 42.47 seconds. Canadian Nicole Walker (Falco van Spieveld) was next-best to finish fourth (4/44.18), followed by American Eve Jobs (Venue d’Fees des Hazalles, 8/46.06) and Eugenio Garza Perez (Armani Sl Z) of Mexico, who elected to retire following a refusal.

“It’s always a little tough going first, but it was winner-take all — medal or no medal,” Madden said. “I had to lay it out there and do it as fast as I could and still leave the jumps up. I have to give credit to my horse. He’s a naturally fast horse, and I’ve done quite a few jump-offs with him. It felt good to have that experience going into that pressure round.”

Modolo Zanotelli also has a well-established partnership with Sirene de la Motte, having ridden the mare for more than two years. He described his relationship with the chestnut as one that “matched straight away” and identified the Pan American Games as a goal for which he’d been aiming her since sitting out the last Olympic Games (BRA) in 2016. His two golds mark his first medals of any kind in a major championship.

“She’s a fantastic horse. She gives everything she can in the ring,” he said. “We like to say, ‘When you have a chestnut mare on your side, they are amazing. They really fight for you.’ She’s one of [those]. She really believes in me, and I believe so much in her.

“What I really wanted here was a medal — [whether] it was silver, gold, or bronze,” he added. “Luckily, it was the gold one today — another gold one!”