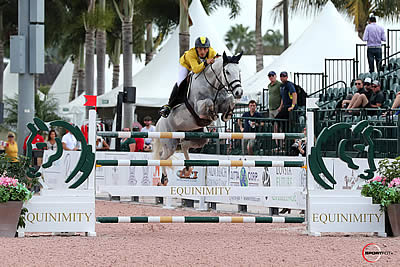 From a starting field of 44, six horses advanced from a technical first round to the tie-breaking jump-off built by course designer Ana Catalina “Catsy” Cruz Harris (MEX). It was a face-off between Irish riders for the top call before Mansur and his mount Everglade Santo Antonio saved the best for last, breaking the timers in 37.03 seconds to win by fractions of a second over Darragh Kerins (IRL) riding Carlos JD Z. Kerins set the pace as the trailblazer in the jump-off with a time of 37.76 seconds.

Mansur began his partnership with Everglade Santo Antonio, an 11-year-old Dutch Warmblood gelding (Clinton x Voltaire) in August 2019. They got to know each other in the 1.20m and 1.25m ranks before quickly stepping up to the international scene.

“I have not had him that long, and he was sent to me by an English rider to sell,” said Mansur of how he got the ride. “Straight away I realized that he is a nice horse. I never imagined he would be as good as he is, but I knew he was going to be good. He was quickly going in the right direction, and already in the indoor season [this fall] he was jumping fantastic.”

“He knew just as much as I did that we had to win that class,” said Steege of Lafitte de Muze, who was recently named the 2019 USHJA Hunter Horse of the Year. “From the moment I got on him today, he was totally focused and on it. I don’t think he put a foot wrong in the class.”

The next division to take place in the E. R. Mische Grand Hunter Ring was the High Performance Conformation. Scott Stewart and Private Life took home the tri-color ribbon by winning three out of five classes. This was Private Life’s first show back since the National Horse Show, and he will probably not show again until the Devon Horse Show.

“Private Life is really trustworthy and always the same. He’s very simple to ride, and he’s a good jumper,” Stewart said of the nine-year-old gelding owned by Dr. Betsee Parker. “We plan to try to peak for this week, so it means a lot to be champion.”