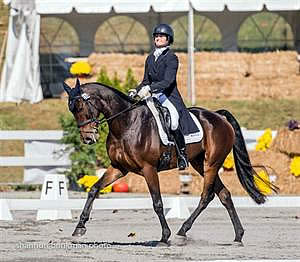 Elkton, Md. – The first phase of The Dutta Corp Fair Hill International competition came to a close on Friday in the William DuPont Jr. Arena as all 45 CCI3* entries completed their dressage tests and the second half of CCI2* competitors went down centerline. In The Dutta Corp/USEF Three-Star Eventing National Championship, Jennie Brannigan and Cambalda hold the early lead heading into the cross country on a score of 42.6. Meanwhile, Thursday’s dressage leader in the CCI2* Boyd Martin and Pancho Villa proved unbeatable after earning a mark of 41.4.

Brannigan (West Grove, PA) and Nina Gardner’s 11-year-old Thoroughbred cross gelding were rewarded for a forward, accurate effort by the Ground Jury of David Lee, Christina Klingspor and Loris Henry to hold the first phase lead. The talented combination was the third-to-last into the ring before the lunch break and had to wait all afternoon to see if their score would hold.

“I was really happy, and I’m just enjoying the moment,” said Brannigan. “I came out of the ring and knew it was a good test but I didn’t know it would be the winning one. I’m very pleased.”

Brannigan and Cambalda are seeking their second career CCI3* victory this weekend after having won the Galway Downs International Horse Trials in 2010. They are also looking to close out their 2013 on a high note after the disappointment of having to withdraw prior to the dressage at the Rolex Kentucky Three-Day Event presented by Land Rover when Cambalda slipped and fell prior to the dressage and incurring an early fall and elimination at the Luhmühlen CCI4*.

“Honestly, the horse has had quite a good year. He had one bad result – falling in the water at Luhmühlen and slipping on the pavement at Rolex was unfortunate but that was bad luck. I would really like to go well for the owners; they deserve it.”

Looking towards Derek di Grazia’s cross country, Brannigan is excited but knows it will pose a test.

“I think it looks good,” said Brannigan. “The two hardest questions are my weaknesses.”

Doug Payne (Pottersville, NJ) and Larry and Amelia Ross’ and his own Crown Talisman slotted into second place in both the National Championship and CCI3* in one their best tests to date. The 10-year-old Holsteiner cross is making his CCI3* debut after stepping up to the Advanced level in August of 2013 and impressed the ground jury on Friday earning a mark of 43.6.

“I was obviously happy with Tali; he has been a work in progress. I’m very lucky to be able to ride him,” said Payne. “He’s not exactly the easiest horse in the world but he was very rideable today. I think he still has the ability to improve.”

Standing in third place after the first phase are Katy Groesbeck (Temecula, Calif.) and her own 16-year-old Anglo-Arabian gelding Oz The Tin Man. The pair travelled to The Dutta Corp Fair Hill International on a Land Rover USEF Competition Grant and proved their place among the top U.S. pairs as they earned a score of 44.

Ellen Doughty (Heartland, Texas) on her own 11-year-old Holsteiner gelding, Sir Oberon, were also competing in Elkton on a Land Rover USEF Competition Grant. The talented pair scored 53.6 and head onto the cross-country in 21st place.

While Friday’s field did their best to unseat the day one dressage leaders, the standard set on Thursday proved unachievable. Martin (Cochranville, Pa.) and the Pancho Villa Syndicate’s 10-year-old Selle Francais cross gelding will set out second on the CCI2* with a two-and-a-half point lead.

Looking towards Saturday, the 2010 Alltech FEI World Equestrian Games and 2012 London Olympic Games veteran believes di Grazia has set a demanding track that will teach riders a lot about their horses.

“You’ll learn a lot about your horse; you’ll learn if it will be a four-star horse,” said Martin. “It’s big and technical; I think this is one of the most challenging three-day events in the world in both the two-and three-star.”

Sharon White (Summit Point, W.V.) maintained her second place position in the National Championship and CCI2* with Mary Ann Ghadban’s nine-year-old Holsteiner mare Under Suspection. The pair will head out on the cross country on a score of 43.9.

Mara Depuy (Round Hill, Va.) and her own KWPN gelding Alimit were the highest placing U.S. pair on Friday scoring 46.1. Putting them into third place in the National Championship and fifth place in the CCI2*.

To read a recap of Thursday’s dressage, click here.

Cross Country gets underway on Saturday with Australia’s Ryan Wood and Fernhill Classic first out on the CCI2* course at 9:06am ET.

Listen to webcast of the Cross Country on the PRO Tour Live Eventing Radio on Ustream: http://ustre.am/Ywh3 or download the free Ustream app for listening on the go!