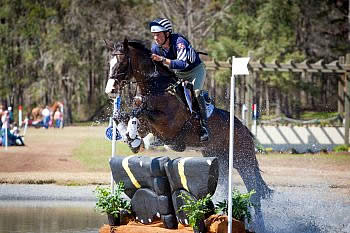 Tallahassee, Fla. – Boyd Martin drove away in a brand new Mercedes SUV after winning the Red Hills International Horse Trials CIC3*. Martin and Trading Aces galloped through the finish line and stopped the clock with just 6.40 time penalties to add to his dressage score of 41.4, which was enough to push overnight leader Alexandra Knowles and Last Call into second place.

Ellen Doughty and Sir Oberon (HQ Outrigger/Cher) were clear and just one second slower than Martin, a feat which moved them up to third from eighth. Martin’s second ride, Sir Donovan (formerly ridden by Katie Ruppel Frei), made up for his eight faults in the show jumping by putting in the fastest round of the day to move up to fourth. 2013 Adequan USEA Gold Cup Champions, Laine Ashker and Anthony Patch, held onto fifth place and Bobby Meyerhoff riding his wife Danica Moore’s Utah B jumped into sixth after starting the weekend off in 31st place.

“It’s a very satisfying victory,” said Martin. “I have been dialed in to winning this from the beginning of the year and obviously I had a few hurdles to cross before we got here, but it has been the yearly plan for the horse. I came close to winning this a few years ago on Neville Bardos and missed out on the car by .2 and quite frankly I thought it was going to happen again today and Allie was going to pip me to the post.”

Martin was asked if there was any update on his wife Silva, a Grand Prix dressage rider who had suffered a head injury while schooling a young horse in Wellington the day before the competition. “She’s making progress,” he said, relieved. “Dr. Mark Hart [US Team doctor] has been wonderful and has been overseeing the whole thing and has triple checked all the scans and reports for me. Without him I would be very confused and I can’t thank him enough. In his words, ‘We are not out of the woods yet,’ but I spoke to her twice today and each time she was better than the last. Every day we get further away from the accident, the risk is reduced.”

The winner of the CIC3* receives the keys to a brand New Mercedes SUV for a year. When asked if he had been motivated by the new wheels, Martin laughed, “It was motivating in that Silva really wanted that Mercedes. I don’t care what car I drive, but to a classy German dressage rider, a Mercedes Benz is something to look forward to I suppose.”

Despite missing out on the car, Alexandra Knowles was delighted with Last Call’s performance. “She jumped a great round and I was ten seconds not fast enough,” said Knowles. “There are a few things I could change on my part but I am very satisfied with my horse. My hat is off to Boyd – he just went ten seconds faster than me today and that’s the name of the sport. I can learn from that.”

Ellen Doughty from Fourney, Texas was grateful for the help she had received during the training sessions with David O’Connor in Florida. “I don’t get regular lessons at home and the lessons I had in the training sessions have been immensely helpful as this was Obie’s best dressage score to date. He’s always good on cross-country, locks onto the fences and never wavers.”

Fence five, a left hand corner to a right hand corner on a tightly bending line, proved to be the bogey fence on the course and was responsible for several eliminations and retirements. When asked what it was about the combination that caused so much trouble, Knowles easily explained it: “There was nothing wrong with the fence; it was just about getting the approach right and giving the horses enough time to see the line and the question.”

The Young Rider closest to the optimum time was Libby Head from Talbotton, Georgia and her 15.1 Thoroughbred by Rockamundo. Libby represented Area III at the Young Riders Championships in 2011 where she placed 5th individually in the CCI2*. Libby and Rocky had a brilliant clear round and will be a pair to watch as the competition season progresses.

Once again, Red Hills proved to be a weekend of top class entertainment for the local community, whether they came to watch the horses in action, Paint the Pony, shop in the trade fair, or play in the magic castle.

To see the full list of results, go here.

About the Adequan USEA Gold Cup and PRO Tour Series
Qualifying for the 2014 Adequan USEA Gold Cup began last fall with the Plantation Field CIC3* (PA) and the Woodside CIC3* (CA) and features 11 qualifying competitions throughout the United States at the Advanced Horse Trials and CIC3* levels. The final will take place at the Nutrena USEA American Eventing Championships September 2014 in Tyler, Texas. Riders who complete a qualifier earn the chance to vie for $40,000 in prize money in the Adequan Advanced Division and the title of Adequan USEA Gold Cup Champion.