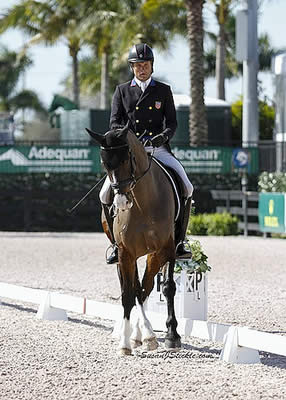 Wellington, FL – January 30, 2015 – Boyd Martin (USA) and Trading Aces bested the competition in the first phase of the Wellington Eventing Showcase presented by Asheville Regional Airport, which was held at The Stadium at Palm Beach International Equestrian Center. Martin and Trading Aces performed a lovely dressage test to the take the lead on a 24.80 as the second-to-last ride of the afternoon. Michael Pollard (USA) and Cyrano currently hold onto second place with a 25.70 followed by Marilyn Little (USA) and RF Scandalous in third scoring a 26.60. Tomorrow’s competition will continue with show-jumping beginning at 10:30 am followed by cross-country at 1:30 pm.

Martin was very pleased with Trading Aces’ test and felt he put in one of the best efforts in their partnership together. “He’s one of my favorites. We’ve had some highs and lows in our career; we’ve won lots and came up short a number of times, but today he was absolutely fabulous,” said Martin. “It was the first time I’ve really done a test and felt like I pretty much got everything out of him. It’s great to be riding him here, and I’m so thankful for the group that owns him and who has stood by him for the past couple of years.”

Pollard was also very happy with this test aboard Cyrano, a relatively new mount for him. The horse was campaigned by his father-in-law, Carl Bouckaert, for Team Belgium and competed with him at the 2012 London Olympic Games. “I’m really pleased with him today. When I got here yesterday I probably wouldn’t have bet on myself to be sitting at this press conference,” he laughed. “We’ve basically had him for two months in the barn, and I’m really happy with the progress we’ve made over the past couple of weeks.”

Marilyn Little, a familiar face in Wellington from her days in the show jumping arena, was excited to be back in Florida, this time competing in the sport of eventing. “This is certainly an odd weekend for me, a wonderful weekend in many ways, but funny to be eventing in Wellington,” she commented on returning to the familiar grounds. “It is certainly home turf but also new turf. I’ve jumped a lot of jumps out in that field, but none of them have looked quite like this. It’s just such a pleasure to be back here.”

Little’s horse RF Scandalous is new to the Advanced level, and she will look to give the mare an educational and competitive ride tomorrow. “She is coming from the CCI 1* and Intermediate level. She’s qualified for Advanced on paper, but she is 10 years old now and is still very new to the level,” Marilyn commented. “She put in a great test today and I’m looking for a good performance from her, but there may be some bobbles. It is still early in the season.”

All three riders commented on what can be expected for the next two phases of the competition. The cross-country course, designed by Captain Mark Phillips, gives riders an opportunity to ride fast but also carefully, as there are many technical questions scattered throughout the course. “I think Captain Phillips did a great job building this course. I think it’s going to be very fast out there, and it will be influential as there are a few corners and skinnies that we may see some glances off of and riders will need to take their time, steady up, and balance,” said Martin.

Pollard agreed that the course will be tough, as it is still early in the season for most of these pairs. “They have the time right to make it a competitive day,” he continued. “Going at Intermediate speed would be too intense for this point in the season. These types of courses are always tough, but it is built really well and beautifully presented.”

Little also offered insight on what to expect from Richard Jeffery’s show jumping course in The Stadium arena. “Richard Jeffery always has challenging courses. He is one of the best, and it will be interesting to see how the eventers feel about competing and jumping on the amazing dressage footing. The horses have jumped well on it in competitions past, but it will be interesting to see the response tomorrow.”

Not only did each rider comment on the spectacular footing and the incredible venue of the Palm Beach International Equestrian Center, but they each thanked the organizers and sponsors – Asheville Regional Airport, Rolex, Land Rover, and Adequan® – for their support of the event. “It is an absolute honor and privilege to be competing in Wellington,” said Martin. “It is probably the best horse trials I have ever been to when you consider the organization, the arenas, and the marquee tent for the owners. It is fantastic to feel like our sport is climbing up to that caliber, and I think all of the riders are just blown away by the standard of competition.”

Pollard echoed Martin’s response by stating that competitions like these only help to strengthen the sport in the United States. “It is a real major addition to the calendar and hopefully we can continue to get more big atmosphere events like this and maybe we will start attracting some Europeans to ride here instead of going over there. To the extent that it is possible, this is exactly what we need to make that sort of thing happen,” he stated.

Little, familiar with Equestrian Sport Productions from previous travels to Wellington, thanked the Bellissimo family and their partners for hosting eventers this weekend at PBIEC. “Knowing I was going to be in Wellington, I knew that there would be a great opportunity here. Mark [Bellissimo’s] family is very involved as his daughters are both great up-and-coming riders and he is an owner himself. He understands what it takes to keep and produce horses of this caliber. Only someone who understands that can appreciate the time and effort it takes to get these horses to this level.”

Competition continues beginning at 10:30am with show jumping followed by cross-country at 1:30pm. To see the full dressage results, stadium jumping order of go, and course map, please visit http://bit.ly/1zp5Lss.

To watch the live stream of tomorrow’s stadium jumping, go to: http://bit.ly/1Dbofgc.

To watch the live stream of tomorrow’s cross-country, go to: http://bit.ly/1EqwYze.