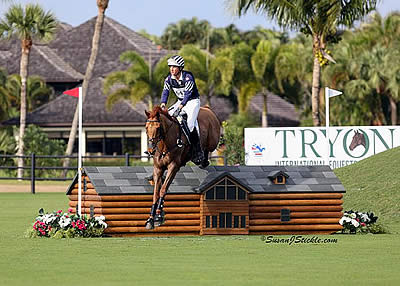 The 2016 event proved to be the most successful yet, as a large crowd of spectators and fans packed the Global Pavilion and lined the fences of the polo and derby fields used to host cross-country competition. Martin and Blackfoot Mystery, owned by the Blackfoot Mystery Syndicate, jumped to an early lead after going clear in the show jumping phase around the difficult track set by Richard Jeffrey. They then continued fault-free on cross country to earn a double clear effort. The cross country track was designed by Captain Mark Phillips and was built by Eric Bull of ETB Equine Construction.

“This year was a much more competitive field, and it was definitely of a higher standard. The course was a bit tougher, and it was harder to win this year than last year. By saying that, I knew this horse I had, Blackfoot Mystery, had a good chance,” said Martin. “We’ve just purchased him thanks to a group of supporters and this is the first time a few of the owners have come to see him. [There are] not many better ways to impress our owners than to bring them to Wellington in this beautiful marquee and have this horse win. I was very pleased on all levels.”

Blackfoot Mystery, a 2004 Thoroughbred gelding (Out of Place x True Mystery), has come into his own with the experienced Martin. The pair was only one of eight clear efforts (no jumping or time faults) in the stadium round, which has been an aspect of training Martin has focused on since acquiring the talented gelding in July.

“At the moment it looks very promising and this horse has a great future,” said Martin. “The ding in this horse when we bought him was his show jumping and I’ve been working very closely with an English show jumping trainer named Richard Pickett. He’s gone well above the call of duty and has been studying the horse’s videos and making trips to Pennsylvania and Aiken, SC to help us. We changed his canter around a bit, just a few little things, but I think we started to see more improvement in the show jumping. He’s careful, but we’re working on getting that blend between confidence and carefulness too in the ring. I’d like to keep on this path. The horse has a wonderful jump, and it’s more about keeping him in the right balance.”

The event, which saw four different nations represented, offered new owners and fans the opportunity to experience the third equestrian Olympic discipline at PBIEC. Martin, who thrives in pressure situations, rose to the occasion once again and found himself crossing the finish with a double clear round in hand, ultimately securing his second victory.

Martin said, “I’ve got a lot of respect for (ESP CEO) Mark Bellissimo, and I think we’ve got a similar personality. His ideas are out of this world, which I love. Wellington is a place for the Olympic disciplines, except for eventers, until this (competition), and I think he’s got the sport we love in front of a lot more people.”

Colleen Rutledge and her impressive home-bred Covert Rights made another bold statement early in the season, adding this top finish to their list of accolades over the past two years. The 2006 Thoroughbred cross gelding (Black Fox Farm Incognito x Let’s Get It Right) has amassed two FEI CCI 4* finishes to its resume over the past two years and looks primed to take the international limelight again, as the duo are headed to the Rolex Kentucky Three-Day CCI 4*.

“The cross-country course was fabulous today,” said Rutledge. “I was so proud of the way that CR went out and ran. The amount that he’s grown up since Rolex last year is just leaps and bounds. He’s a completely different horse. This was just fantastic to run on and the course was great. It asked some very good questions and for me, this was my horse’s first run of the year. It was a fantastic start, and I’m just thrilled with everything. I’ve had a great time and a great run.”

The relationship Rutledge has forged with Covert Rights, known as “CR” in the barn, is strong, and the pair made easy work of both the stadium and cross country courses this afternoon. The talk of the event was the gallop through the Global Pavilion VIP tent, which dropped riders into the sand ring on the other side for their final fence before the finish line. Questions about the obstacle prompted Rutledge to comment on the mentality and partnership between horse and rider.

“I’ve had my horse since he was a baby and I know him inside and out. When I asked him to go through the tent he didn’t question it. I mean really and truly, that looks like a huge deal and it was amazing to ride, but these horses jump ‘key holes’ and stuff along these lines. I think our horses were relatively prepared for it, but it really is about the mind of the horse,” Rutledge described. “It’s great to have a horse that’s a phenomenal mover and a horse that is a phenomenal jumper, but if you have a horse with a great mind you can make up abilities there.”

Daniel Jocelyn was one of two non-U.S. based riders representing the nation of New Zealand who made the trip to PBIEC to test the waters of the event. Tim Price also made the journey to Wellington to ride in the showcase. Both Jocelyn and Price currently reside in the U.K. and were paired with two catch rides for the event. Jocelyn made the most of his time aboard Devil Munchkin a 2008 Dutch Warmblood gelding (Casiro I x Rhona), owned by Sable Giesler. Jocelyn had sat on the gelding just one time before entering the dressage ring on Friday afternoon. They added nothing to their original score of 32.30 for third place.

Jocelyn said, “Firstly, thank you to Sable [Giesler] and Jessica [Bortner-Harris] for lending the horses to me for this weekend. I’m very happy to have had the ride on these horses, and they’ve obviously done a good job on the groundwork because they felt fantastic.”

While the notion of catch riding may be intimidating to most, especially at the Advanced level, Jocelyn took the opportunity in stride, noting that he actually enjoys catch riding and felt prepared on both mounts. He also rode Win the War, owned by Jessica Bortner-Harris, to 21st place.

“This is a fantastic facility, and I’ve enjoyed the three days I’ve been here. It’s an unbelievable experience and something certainly I’ll be taking home and telling everyone about. It’s a great time,” he continued.

Representatives from Asheville Regional Airport and Wellington Equestrian Realty were on hand to discuss their involvement with the event and continued support for eventing and all disciplines of equestrian sport.

“This was such a pleasure to sponsor. It’s an interesting thing to have an airport in western North Carolina sponsor an event in this beautiful area. We are on the periphery of this amazing event that everyone has provided today,” said Tina Kinsey of Asheville Regional Airport. “There is a sister corporation, the Tryon International Equestrian Center, and Asheville Regional Airport is the gateway to that equestrian center. To be here on this gorgeous course with amazing riders, it’s just been a true pleasure.”

Matt Varney of Wellington Equestrian Realty also spoke to the importance of broadening the fan base for the sport of eventing, as the realty company is heavily involved with the sport in Ocala, FL, the home base for many eventing athletes during winter months.

“We’ve had a long relationship with eventing through our sister company, Ocala Horse Properties, started by Chris and Rob Desino. Craig Martin and I have been in Wellington for a number of years now. This is a chance for people to come here and experience what we see every week basically for four months,” said Varney. “What’s so cool [is that] these riders [and horses] are unbelievable athletes. It’s amazing to watch. Any chance that we get to help bring more people to the state of Florida during the winter months, whether that be Ocala or here, is our main goal. We know eventers go back and forth, and we want to see as many shows here as possible for you guys.”

“Thank you to Asheville Regional Airport. They’ve been a great partner here and a great partner in Tryon. We appreciate everything you do for us. We’ve had a great relationship with Wellington Equestrian Realty since they stormed Wellington six years ago. We’re very proud of this event and it really takes a village,” Bellissimo said. “It’s amazing to see a group of athletes, both human and animal, go through this course and everywhere I walked there were so many people who were just excited because they had never seen this before. I’d also like to thank Rolex, Land Rover, Adequan®, and Ariat for their continued support and contribution to this event.”

“It was a high-risk strategy to do this eventing. We have tried to push the envelope a little bit and really engage the audience. The goal of this event was to bring new owners into the sport. I think we’ve had great success in generating interest for owners and my goal is to generate ten new owners for the sport. We had three or four last year, and I’m actually an owner now working with Jimmie and Dom Schramm. I want to engage this at different levels, and I think there will be others who will too,” he continued.

Several new awards were distributed during the awards ceremony, highlighting the dedication and support of owners and team members for all participating horse and rider combinations. Caroline Moran of Goshen Hill donated $10,000 for the Grooms’ Awards, which was distributed to all grooms at the event in honor of their continued hard work and commitment to the sport. Martin’s groom, Sergio Reyes, took top honors earning $2,500, while Colleen Rutledge’s groom Alex Ambelang received $1,500, and $1,000 went to Sabel Giesler, the groom for Daniel Jocelyn this week. The Blackfoot Mystery Syndicate, owners of the winning horse, were awarded with a $10,000 check to be donated to the charity of their choice, which will be made to Guillain-Barre syndrome research, in honor of syndicate member Anne Laver. Martin also collected a $10,000 bonus for winning the event two consecutive years in a row.

“We hope to see this event grow, and I think we’re going to up the stakes a bit. We will increase the prize money to $100,000 and a big part of that is to reward the owners and the riders. This year we added a grooms’ awards, and I’d like to thank Caroline Moran and Goshen Hill,” explained Bellissimo. “I’m a big advocate of supporting the team behind these riders and I think the grooms are, in many ways, the pit crew for these horses and riders and we’d like them to get more recognition. I think it’s a great way to reward some unheralded people in the sport.”

Equestrian Sport Productions would like to thank the team who made the Asheville Regional Airport Wellington Eventing Showcase, presented by Wellington Equestrian Realty, a great success and looks forward to the 2017 edition. For more information, please visit www.pbiec.com.