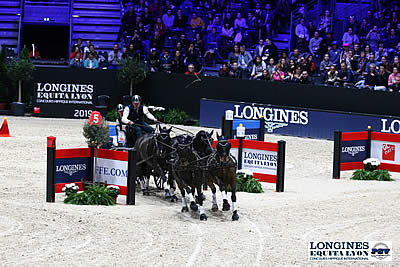 For his first appearance at the Longines Equita Lyon, the world number 1 in the discipline confirmed his standing in the first round of the FEI Driving World Cup stage, which will decide the order for the final. This first round, a kind of dress rehearsal for Sunday, allowed the leaders to get their bearings, test their options, and allowed the horses to discover the arena, the atmosphere, the light, and so on. Combining speed and maneuverability, the leaders of the discipline had to go as quickly as possible between the posts, gates, and over a bridge, each fault adding 4 extra seconds to their initial time. Speed and precision are therefore the watchwords in this event. After the first round, the three best teams are measured in a “drive-off”, by adding the two rounds together to give the final ranking of the day. The first to start the drive-off was the Dutchman Koos de Ronde who set the pace with his carriage, crossing the finish line in 313.51 seconds. The challenge was then taken up by the Swiss Jérôme Voutaz and his four Franche-Montagne horses, the holders of the title for the Lyon stage (312.74 sec.). Their fast pace got the crowds on their feet, as they eagerly awaited to see the world’s number one, the Australian Boyd Exell, who was competing for the first time in Lyon. The master did not disappoint the public, performing a quick round with impressive fluidity, placing first in the class (297.48 sec.). “I was surprised by the warmth and enthusiasm of the audience at 9am! This is my first time in Lyon, and I must say that the organisation is brilliant. You get helped when you arrive, and the hotel is really nice. I feel good here. My horses are great. We did the first round without forcing too much and went faster for the second. They are just the best.”