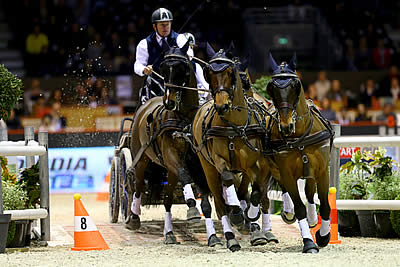 For the first time in years, Bordeaux played host to a Leg instead of the Final, but the seven top drivers guaranteed excitement nevertheless. International Level 4 Course Designer Jeroen Houterman (NED) had laid out a very challenging course, in which technique and speed were well combined. According to some, this was the best course of the season so far.

The top three drivers all have great memories of Bordeaux since they all have won the Final here at least once. Koos de Ronde was the first man in the arena in the Winning Round, which took place over a shortened course and in which the drivers started from scratch again. Koos drove an amazing fast and clear round which put the pressure on Ijsbrand and Boyd: “The last two shows I had the feeling that luck was not on my side, but here it all came together for me. I had a very good feeling, especially because I drove faster than IJsbrand this time. I knew it was a difficult course in which it was easy to have a knock down, but I really went for it and all went okay. I will most likely use the four horses I used today in the Final in Gothenburg as well. I definitely feel I have a chance for a podium place with this four-in-hand; they feel very good.”

Reigning World Cup Champion Ijsbrand Chardon was the next driver in the arena, where the enthusiastic spectators filled the stands. Chardon, however, made an error of judgement by taking a turn too short in the first marathon obstacle. It went well, but the longer route would have been faster: “It was more difficult than I thought. Instead of winning two to three seconds, I lost them. I wanted to force Boyd to take the same route, but it didn’t turn out like that. It was a gamble and I lost it, but that is okay.”

Boyd Exell just came back from a short holiday after Leipzig, which had obviously done him good. The reigning World Champion attacked the course and came out nearly three seconds faster than De Ronde: “I like a tougher course and this one suited me well. It gave us the chance to use our power and to show the technical skills of our team. I decided not to take any risks because the positioning in the Final does count. I am now the last driver to go into the arena in the first competition in Gothenburg later this month, which is important. My horses’ fitness is getting better and I am not afraid that they will become too fit.”

Edouard Simonet (BEL) put down an excellent performance in Bordeaux in both competitions. The talented driver drove his team of Arabo Friesian horses clear and smooth through the course and finished in fourth place. The battle for the sixth place in the Final went between Simonet and Georg von Stein (GER). The latter finished in fifth position, which qualified him for the Final. Wild Card drivers Benjamin Aillaud (FRA) and Sébastien Mourier (FRA) claimed the sixth and seventh place.

The FEI World Cup™ Driving competition in Gothenburg will be broadcast live on FEI TV, the FEI’s official video platform, on Sunday 26 February.